Britain since the Seventies: Politics and Society in the Consumer Age

In Britain since the Seventies, well-known historian Jeremy Black examines the most recent developments in British political, social, cultural and economic history. Taking the triumph of consumerism as an organizing theme, he charts the rise and fall of the Conservative Party, developments in British society, culture and politics, environmental issues, questions of identity, and changes in economic circumstance and direction. Iconic issues such as BSE, transport, asylum seekers and the NHS are viewed from both national and international perspectives.

Black’s account of contemporary Britain challenges as well as entertains, seeking to engage the reader in the process of interpretation. Through the lens of the last three decades, the author unveils his image of a country in which uncertainty, contingency and change are the defining features. In charting the impact of increasing individualism, longevity and secularization, Black is drawn repeatedly to examine a fundamental paradox of modern Britain: “At the start of both century and millennium, the British were more prosperous than ever before, but . . . happiness has not risen with prosperity.”

Britain since the Seventies is a wide-ranging and cogent evaluation of recent British history, and as such will appeal to all those interested in the condition of modern Britain, and how it came to be so, as well as being an ideal introduction for students of the subject. 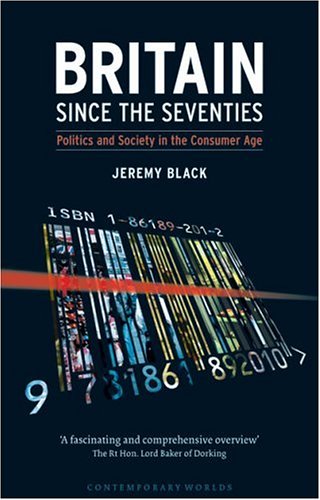 Britain since the Seventies: Politics and Society in the Consumer Age