After Clausewitz: German Military Thinkers Before the Great War

The writings of Carl von Clausewitz loom so large in the annals of military theory that they obscure the substantial contributions of thinkers who came after him. This is especially true for those German theorists who wrote during the half century preceding World War I. However, as Antulio Echevarria argues, although none of those thinkers approached Clausewitz’s stature, they were nonetheless theorists of considerable vision.

The Kaiser’s theorists have long been portrayed as narrow-minded thinkers rigidly attached to an outmoded way of war, little altered since Napoleon’s time. According to this view, they ignored or simply failed to understand how industrialization and modernization had transformed the conduct of war. They seemed unaware of how numerous advances in technology and weaponry had so increased the power of the defensive that decisive victory had become virtually impossible.

But Echevarria disputes this traditional view and convincingly shows that these theorists—Boguslawski, Goltz, Schlieffen, Hoenig, and their American and European counterparts-were not the architects of outmoded theories. In fact, they duly appreciated the implications of the vast advances in modern weaponry (as well as in transportation and communications) and set about finding solutions that would restore offensive maneuver to the battlefield.

Among other things, they underscored the emerging need for synchronizing concentrated firepower with rapid troop movements, as well as the necessity of a decentralized command scheme in order to cope with the greater tempo, lethality, and scope of modern warfare. In effect, they redefined the essential relations among the combined arms of infantry, artillery, and cavalry

Echevarria goes on to suggest that attempts to apply new military theories and doctrine were uneven due to deficiencies in training and an overall lack of interest in theory among younger officers. It is this failure of application, more than the theories themselves, that are responsible for the ruinous slaughter of World War I. 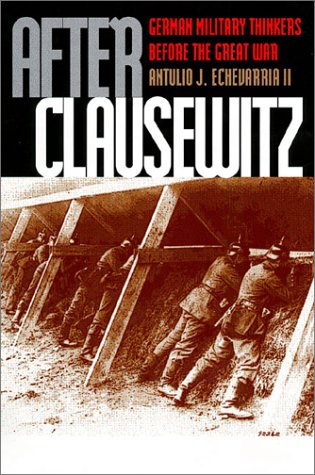 After Clausewitz: German Military Thinkers Before the Great War