Many armed-political movements such as Hezbollah, Hamas, and the Irish Republican Army (IRA) have their roots in insurrection and rebellion. In Armed Political Organizations, Benedetta Berti seeks to understand when and why violent actors in a political organization choose to vote rather than bomb their way to legitimacy.

Berti argues that the classic theory of the democratization process, which sees violence and elections at opposite ends of the political spectrum, is too simplistic and wholly inadequate for understanding the negotiation and disarmament work that is necessary for peaceful resolution of armed conflicts and movement toward electoral options. In this comparative study, she develops an alternative cyclical model that clarifies why armed groups create a political wing and compete in elections, and how this organizational choice impacts subsequent decisions to relinquish armed struggle.

In her conclusion, Berti draws out what the implications are for a government’s ability to engage armed political groups to improve the chances of political integration. Berti’s innovative framework and careful choice of case studies, presented in a jargon-free, accessible style, will make this book attractive to not only scholars and students of democratization processes but also policymakers interested in conflict resolution and peacekeeping efforts. 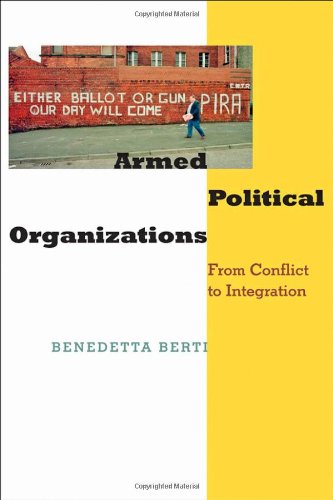