A Nation Must Think Before it Acts Compulsion in Religion: Saddam Hussein, Islam, and the Roots of Insurgencies in Iraq
Share:

Home / Books / Compulsion in Religion: Saddam Hussein, Islam, and the Roots of Insurgencies in Iraq

Compulsion in Religion: Saddam Hussein, Islam, and the Roots of Insurgencies in Iraq

Samuel Helfont draws on extensive research with Ba’thist archives to investigate the roots of the religious insurgencies that erupted in Iraq following the American-led invasion in 2003. In looking at Saddam Hussein’s policies in the 1990s, many have interpreted his support for state-sponsored religion as evidence of a dramatic shift away from Arab nationalism toward political Islam. While Islam did play a greater role in the regime’s symbols and Saddam’s statements in the 1990s than it had in earlier decades, the regime’s internal documents challenge this theory.

The “Faith Campaign” Saddam launched during this period was the culmination of a plan to use religion for political ends, begun upon his assumption of the Iraqi presidency in 1979. At this time, Saddam began constructing the institutional capacity to control and monitor Iraqi religious institutions. The resulting authoritarian structures allowed him to employ Islamic symbols and rhetoric in public policy, but in a controlled manner. Saddam ultimately promoted a Ba’thist interpretation of religion that subordinated it to Arab nationalism, rather than depicting it as an independent or primary political identity.

The point of this examination of Iraqi history, other than to correct the current understanding of Saddam Hussein’s political use of religion throughout his presidency, is to examine how Saddam’s controlled use of religion was dismantled during the US-Iraq war, and consequently set free extremists that were suppressed under his regime. When the American-led invasion destroyed the regime’s authoritarian structures, it unwittingly unhinged the forces that these structures were designed to contain, creating an atmosphere infused with religion, but lacking the checks provided by the former regime. Groups such as the Sadrists, al-Qaida, and eventually the Islamic State emerged out of this context to unleash the insurgencies that have plagued post-2003 Iraq. 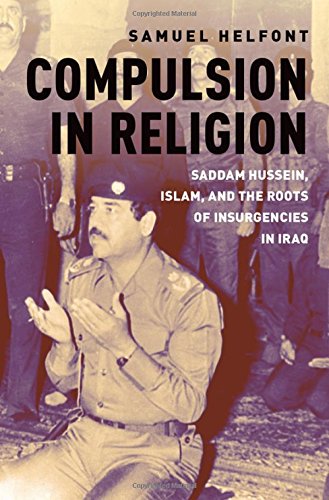 Compulsion in Religion: Saddam Hussein, Islam, and the Roots of Insurgencies in Iraq