Cruelty and Silence: War, Tyranny, Uprising, and the Arab World

“One of the most important books ever written on the state of the modern Middle East.” ―Geraldine Brooks, Wall Street Journal

The Iraqi dissident Kanan Makiya brought the attention of the world to the brutality of Saddam Hussein’s regime in his powerful 1989 bestseller Republic of Fear. Now, writing for the first time under his own name, Makiya confronts the broad realities of tyranny in the Middle East and the moral failure of Arab and pro-Arab intellectuals to repudiate it.

Makiya first gives us the stories of Khalil, Abu Haydar, Omar, Mustafa, and Taimour―the Arab and Kurdish heroes of this book. Their testimony, revealing the true extent of occupation, prejudice, revolution, and routinized violence, is a compelling example of the literature of witness. He then links these tales of survival to an examination of the Arab intelligentsia’s response to Saddam Hussein and the Gulf War, comparing the flood of condemnation of the West with the trickle of protest over Saddam’s mass murder campaign against the Kurds.

In his exploration of these “landscapes of cruelty and silence,” Kanan Makiya lays out the nationalist mythologies that underlie them. He calls for a new politics in the Arab world―a politics that puts absolute respect for human life above all else. 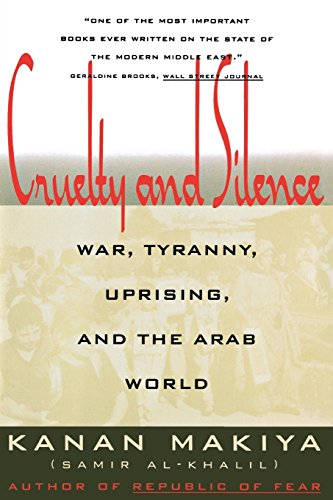 Cruelty and Silence: War, Tyranny, Uprising, and the Arab World