Democratization and Market Reform in Developing and Transitional Countries: Think Tanks as Catalysts

This book explores the pivotal role of think tanks in the democratization and economic reform movements by evaluating their overall effect on the transformation process in developing and transitional countries around the world.

James G. McGann assesses twenty-three think tanks, located in nine countries and four regions of the world: Chile, Peru, Poland, Slovakia, South Africa, Botswana, the Philippines, Thailand, and Vietnam, that have most impacted political and economic transitions in their respective countries. The author examines the role they played in the process of democratization and market reform during the late 80s and 90s and identifies the importance of think tanks in these processes by evaluating their overall effect on the policymaking process. He argues in the early stages of a transition from an authoritarian regime to an open and democratic society the activities of think tanks are especially critical, and they have provided a civil society safety net to support these fragile democracies. 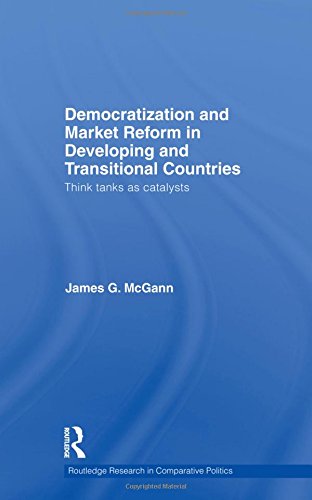 Democratization and Market Reform in Developing and Transitional Countries: Think Tanks as Catalysts

James G. McGann, Ph.D., is an FPRI Senior Fellow and Director of its Think Tanks and Foreign Policy Program. He is also a senior lecturer in International Studies at the Lauder Institute, director of the Think Tanks and Civil Societies Program (TTCSP) and senior fellow, Fels Institute of Government at the University of Pennsylvania.