Half a decade after Arabs across the Middle East poured into the streets to demand change, hopes for democracy have disappeared in a maelstrom of violence and renewed state repression. Egypt remains an authoritarian state, Syria and Yemen are in the midst of devastating civil wars, Libya has descended into anarchy, and the self-declared Islamic State rules a large swath of territory. Even Turkey, which also experienced large-scale protests, has abandoned its earlier shift toward openness and democracy and now more closely resembles an autocracy.

How did things go so wrong so quickly across a wide range of regimes? In False Dawn, noted Middle East regional expert Steven A. Cook looks at the trajectory of events across the region from the initial uprising in Tunisia to the failed coup in Turkey to explain why the Middle Eastern uprisings did not succeed. Despite appearances, there were no true revolutions in the Middle East five years ago: none of the affected societies underwent social revolutions, and the old structures of power were never eliminated. Even supposed successes like Tunisia still face significant barriers to democracy because of the continued strength of old regime players. Libya, the state that came closest to revolution, has fragmented into chaos, and Turkey’s president, Recep Tayyip Erdogan, has used the recent coup against him as grounds for a widespread crackdown on his opponents, reinforcing the Turkish leader’s personal power.

After taking stock of how and why the uprisings failed to produce lasting change, Cook considers the role of the United States in the region. What Washington cannot do, Cook argues, is shape the politics of the Middle East going forward. While many in the policymaking community believe that the United States must “get the Middle East right,” American influence is actually quite limited; the future of the region lies in the hands of the people who live there. Authoritative and powerfully argued, False Dawn promises to be a major work on one of the most important historical events of the past quarter century.

False Dawn: Protest, Democracy, and Violence in the New Middle East is available for purchase on Amazon. 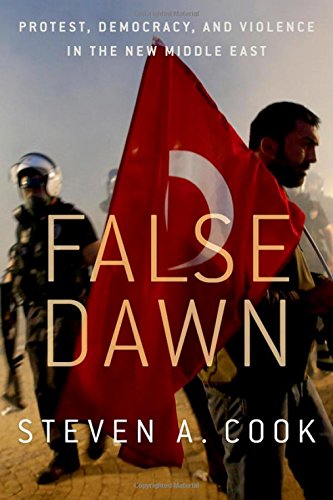 Steven A. Cook is Eni Enrico Mattei senior fellow for Middle East and Africa studies at the Council on Foreign Relations (CFR). He is an expert on Arab and Turkish politics as well as U.S.-Middle East policy.