FDR and the Spanish Civil War: Neutrality and Commitment in the Struggle that Divided America

What was the relationship between President Franklin D. Roosevelt, architect of America’s rise to global power, and the 1936–39 Spanish Civil War, which inspired passion and sacrifice, and shaped the road to world war? While many historians have portrayed the Spanish Civil War as one of Roosevelt’s most isolationist episodes, Dominic Tierney argues that it marked the president’s first attempt to challenge fascist aggression in Europe. Drawing on newly discovered archival documents, Tierney describes the evolution of Roosevelt’s thinking about the Spanish Civil War in relation to America’s broader geopolitical interests, as well as the fierce controversy in the United States over Spanish policy.

Between 1936 and 1939, Roosevelt’s perceptions of the Spanish Civil War were transformed. Initially indifferent toward which side won, FDR became an increasingly committed supporter of the leftist government. He believed that German and Italian intervention in Spain was part of a broader program of fascist aggression, and he worried that the Spanish Civil War would inspire fascist revolutions in Latin America. In response, Roosevelt tried to send food to Spain as well as illegal covert aid to the Spanish government, and to mediate a compromise solution to the civil war. However unsuccessful these initiatives proved in the end, they represented an important stage in Roosevelt’s emerging strategy to aid democracy in Europe. 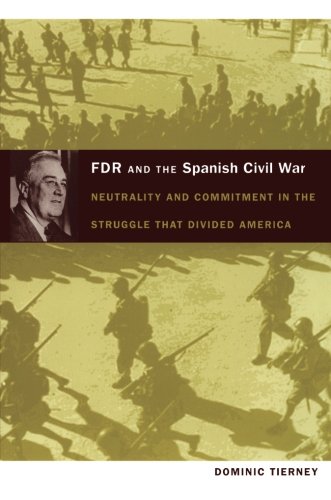 FDR and the Spanish Civil War: Neutrality and Commitment in the Struggle that Divided America