On March 18,2000, Taiwan’s voters stunned the world by choosing Chen Shui-bian. the candidate of the opposition Democratic Progressive Party (DPP), to be their president A host of new issues quickly became the subject of debate. What is the DPP? Where did it come from and what does it stand for? How will it use its newly won power? Will it risk war with mainland China in pursuit of independence? Addressing these quest ons, From Opposition to Power provides a comprehensive overview of the DPP, its history, policies, and structure. Rigger traces the party’s origins in opposition movements of the 1960s and 1970s and recounts how it was founded in defiance of mart al law in 1986. She then analyzes its internal conflicts over policy and power and explains the party’s changing stance on such issues as Taiwan’s independence, international relations and economic policy. A key theme is the role the DPP has played in promoting democratization and fair competition in Taiwan. The first book in English to focus on this influential new power, Rigger’s study is a riveting read for those hoping to understand and anticipate events in East Asia. 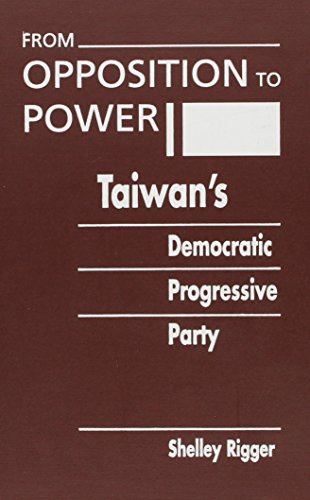