A Nation Must Think Before it Acts From Triumph to Crisis: Neoliberal Economic Reform in Postcommunist Countries
Share: 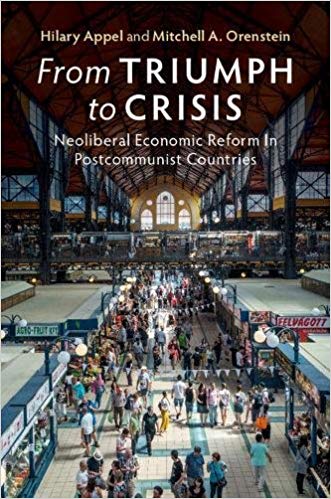 From Triumph to Crisis: Neoliberal Economic Reform in Postcommunist Countries

The postcommunist countries were amongst the most fervent and committed adopters of neoliberal economic reforms. Not only did they manage to overcome the anticipated domestic opposition to ‘shock therapy’ and Washington Consensus reforms, but many fulfilled the membership requirements of the European Union and even adopted avant-garde neoliberal reforms like the flat tax and pension privatization. Neoliberalism in the postcommunist countries went farther and lasted longer than expected, but why? Unlike pre-existing theories based on domestic political-economic struggles, this book focuses on the imperatives of re-insertion into the international economy. Appel and Orenstein show how countries engaged in ‘competitive signaling’, enacting reforms in order to attract foreign investment. This signaling process explains the endurance and intensification of neoliberal reform in these countries for almost two decades, from 1989–2008, and its decline thereafter, when inflows of capital into the region suddenly dried up. This book will interest students of political economy and Eastern European and Eurasian politics.

From Triumph to Crisis: Neoliberal Economic Reform in Postcommunist Countries