When President Dwight Eisenhower left Washington, D.C., at the end of his second term, he retired to a farm in historic Gettysburg, Pennsylvania, that he had bought a decade earlier. Living on the farm with the former president and his wife, Mamie, were his son, daughter-in-law, and four grandchildren, the oldest of whom, David, was just entering his teens. In this engaging and fascinating memoir, David Eisenhower—whose previous book about his grandfather, Eisenhower at War, 1943–1945, was a finalist for the Pulitzer Prize—provides a uniquely intimate account of the final years of the former president and general, one of the giants of the twentieth century.

In Going Home to Glory, Dwight Eisenhower emerges as both a beloved and forbidding figure. He was eager to advise, instruct, and assist his young grandson, but as a general of the army and president, he held to the highest imaginable standards. At the same time, Eisenhower was trying to define a new political role for himself. Ostensibly the leader of the Republican party, he was prepared to counsel his successor, John F. Kennedy, who sought instead to break with Eisenhower’s policies. (In contrast, Kennedy’s successor, Lyndon Johnson, would eagerly seek Eisenhower’s advice.) As the tumultuous 1960s dawned, with assassinations, riots, and the deeply divisive war in Vietnam, plus a Republican nominee for president in 1964 whom Eisenhower considered unqualified, the former president tried to chart the correct course for himself, his party, and the country. Meanwhile, the past continued to pull on him as he wrote his memoirs, and publishers and broadcasters asked him to reminisce about his wartime experiences.

When his grandfather took him on a post-presidential tour of Europe, David saw firsthand the esteem with which monarchs, prime ministers, and the people of Europe held the wartime hero. Then as later, David was under the watchful eye of a grandfather who had little understanding of or patience with the emerging rock ’n’ roll generation. But even as David went off to boarding school and college, grandfather and grandson remained close, visiting and corresponding frequently. David and Julie Nixon’s romance brought the two families together, and Eisenhower strongly endorsed his former vice-president’s successful run for the presidency in 1968.

With a grandson’s love and devotion but with a historian’s candor and insight, David Eisenhower has written a remarkable book about the final years of a great American whose stature continues to grow. 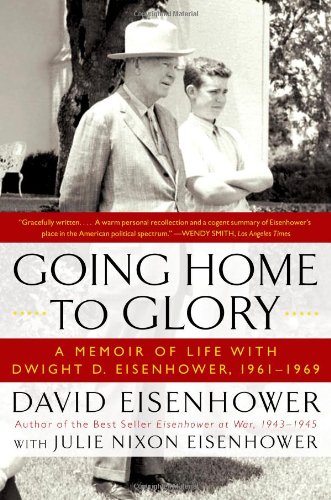 David Eisenhower is Senior Fellow of FPRI and co-chairman of FPRI’s History Institute. He is also the Director of the Institute for Public Service at Penn and a member of the editorial board for the Presidential Studies Quarterly.