Inside the Kremlin’s Cold War: From Stalin to Krushchev

Covering the volatile period from 1945 to 1962, Zubok and Pleshakov explore the personalities and motivations of the key people who directed Soviet political life and shaped Soviet foreign policy. They begin with the fearsome figure of Joseph Stalin, who was driven by the dual dream of a Communist revolution and a global empire. They reveal the scope and limits of Stalin’s ambitions by taking us into the world of his closest subordinates, the ruthless and unimaginative foreign minister Molotov and the Party’s chief propagandist, Zhdanov, a man brimming with hubris and missionary zeal. The authors expose the machinations of the much-feared secret police chief Beria and the party cadre manager Malenkov, who tried but failed to set Soviet policies on a different course after Stalin’s death. Finally, they document the motives and actions of the self-made and self-confident Nikita Khrushchev, full of Russian pride and party dogma, who overturned many of Stalin’s policies with bold strategizing on a global scale. The authors show how, despite such attempts to change Soviet diplomacy, Stalin’s legacy continued to divide Germany and Europe, and led the Soviets to the split with Maoist China and to the Cuban missile crisis.

Zubok and Pleshakov’s groundbreaking work reveals how Soviet statesmen conceived and conducted their rivalry with the West within the context of their own domestic and global concerns and aspirations. The authors persuasively demonstrate that the Soviet leaders did not seek a conflict with the United States, yet failed to prevent it or bring it to conclusion. They also document why and how Kremlin policy-makers, cautious and scheming as they were, triggered the gravest crises of the Cold War in Korea, Berlin, and Cuba. Taking us into the corridors of the Kremlin and the minds of its leaders, Zubok and Pleshakov present intimate portraits of the men who made the West fear, to reveal why and how they acted as they did. 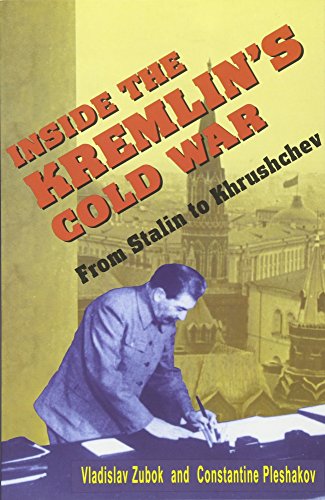 Inside the Kremlin's Cold War: From Stalin to Krushchev