John Williamson Nevin (1803-1886) taught at Mercersburg Seminary when he wrote The Anxious Bench(1843) and The Mystical Presence (1846), volumes dealing with revivalism and the Lord’s Supper, respectively. The last ten years have seen a revival of interest in this theologian, a graduate of Princeton Theological Seminary.

D. G. Hart seeks to fan this revival. “Because of his critique of the revivalist-inspired Protestant mainstream, and because the circumstances he faced are still important, Nevin’s ideas and arguments possessed relevance not only for his own age but also for contemporary Protestantism,” writes Hart. “However offbeat Nevin’s thought may sometimes appear, his assessment of popular Christianity in the United States was arguably the most astute from the perspective of historical Protestantism that any American Reformed or Presbyterian ever formulated.”

To the Reformed tradition Nevin “recovered the older Calvinist regard for the church as a mediator of divine grace. These were no small accomplishments, and exploring their emergence, development, and significance is the aim of this book.”

This second volume in the American Reformed Biography series will help readers gain a better understanding of the sacraments, as well as give them insight into Nevin’s critique of the revivalist tradition. The extensive documentation, substantial bibliographical essay, and index encourage further study. 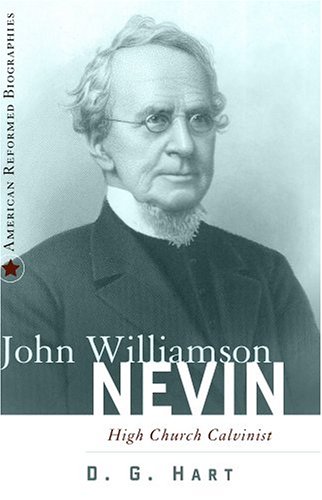