Maritime Power and the Law of the Sea:: Expeditionary Operations in World Politics

In Maritime Power and the Law of the Sea: Expeditionary Operations in World Politics, Commander James Kraska analyzes the evolving rules governing freedom of the seas and their impact on expeditionary operations in the littoral, near-shore coastal zone. Coastal state practice and international law are developing in ways that restrict naval access to the littorals and associated coastal communities and inshore regions that have become the fulcrum of world geopolitics. Consequently, the ability of naval forces to project expeditionary power throughout semi-enclosed seas, exclusive economic zones (EEZs) and along the important sea-shore interface is diminishing and, as a result, limiting strategic access and freedom of action where it is most needed.

Commander Kraska describes how control of the global commons, coupled with new approaches to sea power and expeditionary force projection, has given the United States and its allies the ability to assert overwhelming sea power to nearly any area of the globe. But as the law of the sea gravitates away from a classic liberal order of the oceans, naval forces are finding it more challenging to accomplish the spectrum of maritime missions in the coastal littorals, including forward presence, power projection, deterrence, humanitarian assistance and sea control. The developing legal order of the oceans fuses diplomacy, strategy and international law to directly challenge unimpeded access to coastal areas, with profound implications for American grand strategy and world politics. 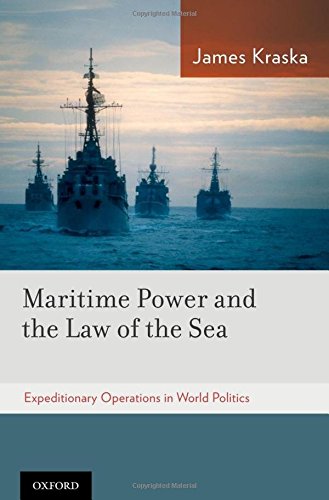 Maritime Power and the Law of the Sea:: Expeditionary Operations in World Politics

James Kraska is a Senior Fellow in FPRI’s Program on National Security. He serves as Professor of Oceans Law and Policy in the Stockton Center for the Study of International Law at the U.S. Naval War College.