Monsoon: The Indian Ocean and the Future of American Power

On the world maps common in America, the Western Hemisphere lies front and center, while the Indian Ocean region all but disappears. This convention reveals the geopolitical focus of the now-departed twentieth century, but in the twenty-first century that focus will fundamentally change. In this pivotal examination of the countries known as “Monsoon Asia”—which include India, Pakistan, China, Indonesia, Burma, Oman, Sri Lanka, Bangladesh, and Tanzania—bestselling author Robert D. Kaplan shows how crucial this dynamic area has become to American power. It is here that the fight for democracy, energy independence, and religious freedom will be lost or won, and it is here that American foreign policy must concentrate if the United States is to remain relevant in an ever-changing world. From the Horn of Africa to the Indonesian archipelago and beyond, Kaplan exposes the effects of population growth, climate change, and extremist politics on this unstable region, demonstrating why Americans can no longer afford to ignore this important area of the world. 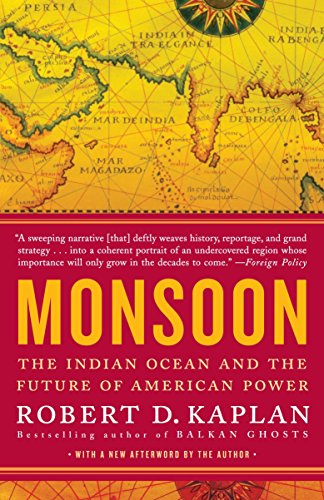 Monsoon: The Indian Ocean and the Future of American Power

Robert Kaplan is the Robert Strausz-Hupé Chair Geopolitics at the Foreign Policy Research Institute (FPRI) and serves on FPRI's Board of Advisors. He is a prolific and influential writer for The Atlantic Monthly, and joined the Center for a New American Security (CNAS) as a Senior Fellow in March 2008.