A Nation Must Think Before it Acts Oceans Ventured: Winning the Cold War at Sea
Share:

When Ronald Reagan took office in January 1981, the United States and NATO were losing the Cold War. The USSR had superiority in conventional weapons and manpower in Europe, and had embarked on a massive program to gain naval preeminence. But Reagan already had a plan to end the Cold War without armed conflict.

Reagan led a bipartisan Congress to restore American command of the seas by building the navy back to six hundred major ships and fifteen aircraft carriers. He adopted a bold new strategy to deploy the growing fleet to northern waters around the periphery of the Soviet Union and demonstrate that the NATO fleet could sink Soviet submarines, defeat Soviet bomber and missile forces, and strike aggressively deep into the Soviet homeland if the USSR attacked NATO in Central Europe. New technology in radars, sensors, and electronic warfare made ghosts of American submarines and surface fleets. The United States proved that it could effectively operate carriers and aircraft in the ice and storms of Arctic waters, which no other navy had attempted. The Soviets, suffocated by this naval strategy, were forced to bankrupt their economy trying to keep pace. Shortly thereafter the Berlin Wall fell, and the USSR disbanded.

In Oceans Ventured, John Lehman reveals for the first time the untold story of the naval operations that played a major role in winning the Cold War. 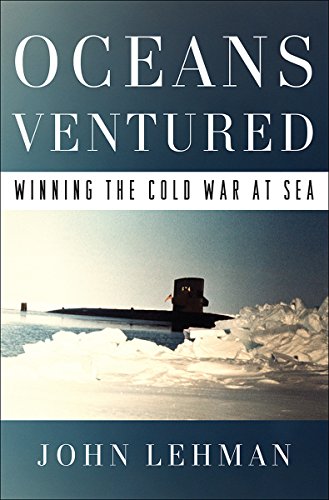