On Seas of Glory: Heroic Men, Great Ships, and Epic Battles of the American Navy

In On Seas of Glory, the U.S. Navy meets a storyteller worthy of its noble history. Former Secretary of the Navy John Lehman gives a sweeping narrative of the service’s illustrious past, from the Revolutionary War to the present day, filled with the ships that dominated the seas, equally titanic personalities, and the battles that made history.
Lehman profiles naval greats from John Paul Jones to William “Bull” Halsey, as well as the lesser-known sailors who have made the U.S. Navy the mightiest in the world, using diaries, memoirs, and letters to reveal naval combat as though firsthand. He also highlights the warships that have dominated the seas of their day and the battles in which they fought — illustrated by detailed maps, woodcuts, paintings, and never-before-published photographs.
With this chronicle of selfless sacrifice and awesome courage on the war-swept seas around the world, Lehman reminds us that the legends chronicled in these pages were real men and women, that the navy they fought for still sails, and that today their heroism is needed more than ever. 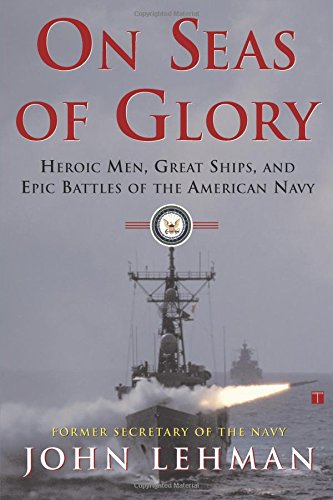 On Seas of Glory: Heroic Men, Great Ships, and Epic Battles of the American Navy