The Path to War: How the First World War Created Modern America

When war broke out in Europe in August of 1914, it seemed, to observers in the United States, the height of madness. The Old World and its empires were tearing each other apart, and while most Americans blamed the Germans, pitied the Belgians, and felt kinship with the Allies, they wanted no part in the carnage. Two years into war President Woodrow Wilson won re-election by pledging to keep out of the conflict. Yet by the spring of 1917-by which point millions had been killed for little apparent gain or purpose-the fervor to head “Over There” swept the country. America wanted in.

The Path to War shows us how that happened. Entry into the war resulted from lengthy debate and soul-searching about national identity, as so-called “hyphenated citizens” of Irish and German heritage wrestled with what it meant to be American. Many hoped to keep to the moral high ground, condemning German aggression while withholding from the Allies active support, offering to mediate between the belligerents while keeping clear. Others, including the immensely popular former president Theodore Roosevelt, were convinced that war offered the country the only way to assume its rightful place in world affairs. Neiberg follows American reaction to such events as the sinking of the Lusitania, German terrorism, and the incriminating Zimmermann telegram, shedding light on the dilemmas and crises the country faced as it moved from ambivalence to belligerence.

As we approach the centenary of the war, the effects of the pivot from peace to war still resonate, as Michael Neiberg’s compelling book makes clear. The war transformed the United States into a financial powerhouse and global player, despite the reassertion of isolationism in the years that followed. Examining the social, political, and financial forces at work as well as the role of public opinion and popular culture, The Path to War offers both a compelling narrative and the inescapable conclusion that World War One was no parenthetical exception in the American story but a moment of national self-determination. 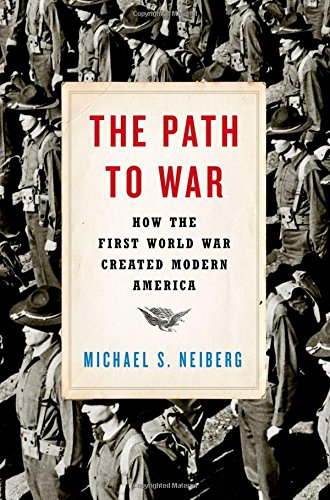 The Path to War: How the First World War Created Modern America

Michael Neiberg, a Senior Fellow in the Center for the Study of America and the West at the Foreign Policy Research Institute, is Professor of History in the Department of National Security Studies at the US Army War College in Carlisle, PA.