In 2008 Ma Ying-jeou was elected President of Taiwan, and the Kuomintang (KMT) returned to power after eight years of rule by the Democratic Progressive Party (DPP). Since taking power, the KMT has faced serious difficulties, as economic growth has been sluggish, society has been polarised over issues of identity and policy, and rapprochement between Taipei and Beijing has met with suspicion or reservation among large segments of Taiwanese society. Indeed, while improved relations with the United States have bolstered Taiwan’s security, warming cross-Strait relations have in turn made Taiwan more dependent upon and vulnerable to an increasingly powerful China.

This book provides a comprehensive analysis of the return of the Kuomintang (KMT) to power, and examines the significant domestic political, economic, social and international challenges and changes that have characterized Taiwan since 2008. It identifies the major domestic, cross-Strait and foreign policy trends, and addresses key issues such as

In turn, the contributors look towards the final years of Ma’s presidency and beyond, and the structural realities – both domestic and external – that will shape Taiwan’s future.

Political Changes in Taiwan Under Ma Ying-jeou will be of great interest to students and scholars of Taiwan studies, comparative politics, international relations, and economics. It will also appeal to policy makers working in the field. 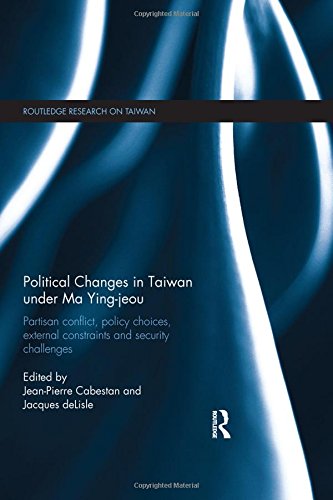