Reconsidering the American Way of War: US Military Practice from the Revolution to Afghanistan

Challenging several longstanding notions about the American way of war, this book examines US strategic and operational practice from 1775 to 2014. It surveys all major US wars from the War of Independence to the campaigns in Iraq and Afghanistan, as well as most smaller US conflicts to determine what patterns, if any, existed in American uses of force. Contrary to many popular sentiments, Echevarria finds that the American way of war is not astrategic, apolitical, or defined by the use of overwhelming force. Instead, the American way of war was driven more by political considerations than military ones, and the amount of force employed was rarely overwhelming or decisive.

As a scholar of Clausewitz, Echevarria borrows explicitly from the Prussian to describe the American way of war not only as an extension of US policy by other means, but also the continuation of US politics by those means. The book’s focus on strategic and operational practice closes the gap between critiques of American strategic thinking and analyses of US campaigns. Echevarria discovers that most conceptions of American strategic culture fail to hold up to scrutiny, and that US operational practice has been closer to military science than to military art. 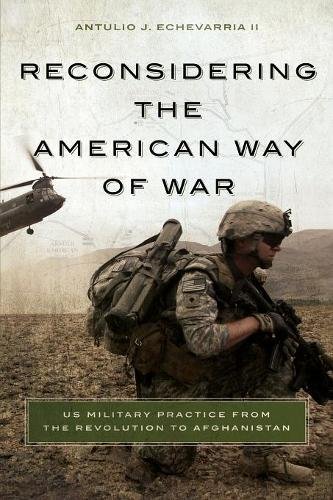 Reconsidering the American Way of War: US Military Practice from the Revolution to Afghanistan