Out of the Red : Building Capitalism and Democracy in Postcommunist Europe

After the fall of the Berlin Wall, the countries of East-Central Europe embarked on a journey to transform themselves into democratic capitalist societies. Their governments searched for strategies that would allow them to pursue radical market reforms within the context of nascent democratic politics. Poland adopted a neoliberal strategy that attempted to push through as much reform as possible before an antireform backlash could occur. In the Czech Republic, a social liberal strategy for transformation attempted to combine neoliberal macro-economic policies with social democratic measures designed to avert such a backlash.
A detailed analysis of Poland and the Czech Republic suggests that alternation between strategies has been the secret to the success of East-Central European countries.
This comparative case analysis identifies the significance of reform mistakes during transition and the corrective benefits of policy alternation, its claims illustrated with an in-depth study of privatization policy in the two countries.
Mitchell A. Orenstein delves into the historic struggle to build capitalism and democracy during a decade of post- communist transition in East-Central Europe and develops a model that explains why democratic policy alternation may accelerate policy learning under conditions of uncertainty and constraint.
Out of the Red is accessible to a general audience and as such is suitable for both graduate and undergraduate courses on political economy. It will be of particular interest to economists, political scientists, sociologists, students of postcommunism, and anyone interested in the relations between capitalism and democracy in the contemporary world. 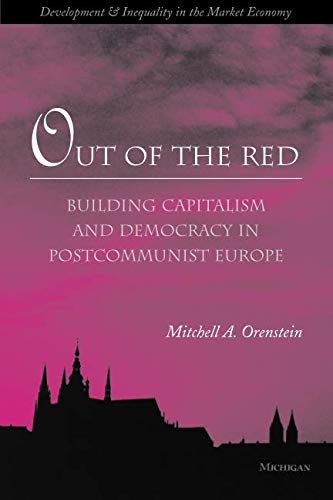 Out of the Red : Building Capitalism and Democracy in Postcommunist Europe