Republic of Fear: The Politics of Modern Iraq, Updated Edition

First published in 1989, just before the Gulf War broke out, Republic of Fear was the only book that explained the motives of the Saddam Hussein regime in invading and annexing Kuwait. This edition, updated in 1998, has a substantial introduction focusing on the changes in Hussein’s regime since the Gulf War.

In 1968 a coup d’état brought into power an extraordinary regime in Iraq, one that stood apart from other regimes in the Middle East. Between 1968 and 1980, this new regime, headed by the Arab Ba’th Socialist party, used ruthless repression and relentless organization to transform the way Iraqis think and react to political questions. In just twelve years, a party of a few thousand people grew to include nearly ten percent of the Iraqi population.

This book describes the experience of Ba’thism from 1968 to 1980 and analyzes the kind of political authority it engendered, culminating in the personality cult around Saddam Hussein. Fear, the author argues, is at the heart of Ba’thi politics and has become the cement for a genuine authority, however bizarre.

Examining Iraqi history in a search for clues to understanding contemporary political affairs, the author illustrates how the quality of Ba’thi pan-Arabism as an ideology, the centrality of the first experience of pan-Arabism in Iraq, and the interaction between the Ba’th and communist parties in Iraq from 1958 to 1968 were crucial in shaping the current regime.

Saddam Hussein’s decision to launch all-out war against Iran in September 1980 marks the end of the first phase of this re-shaping of modern Iraqi politics. The Iraq-Iran war is a momentous event in its own right, but for Iraq, the author argues, the war diverts dissent against the Ba’thi regime by focusing attention on the specter of an enemy beyond Iraq’s borders, thus masking a hidden potential for even greater violence inside Iraq. 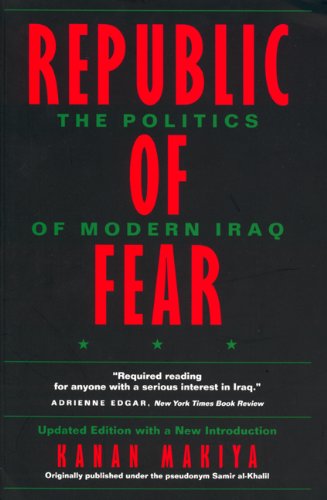 Republic of Fear: The Politics of Modern Iraq, Updated Edition