Spain Betrayed: The Soviet Union in the Spanish Civil War

The Spanish Civil War has long been the stuff of legend. Thousands of brave young men from all over the Western world, most of them organised by their local Communist parties, rushed to Spain to support the democratic Republic against right-wing forces led by rebellious generals in the Spanish officer corps. Although the Republic was eventually defeated, some observers believed that the effort to defend it was a selfless undertaking of the international Communist movement and the Soviet Union – a noble crusade against Hitler, Mussolini, and their Spanish puppet Franco. This book presents a very different view of the role of the Soviet Union in this war. Based on previously unavailable Moscow archives, it provides the first full documentation of that country’s duplicitous and self-serving activities. Documents in the book reveal that the Soviet Union not only swindled the Spanish Republic out of millions of dollars through arms deals but also sought to take over and run the Spanish economy, government, and armed forces in order to make Spain a Soviet possession, thereby effectively destroying the foundations of authentic Spanish antifascism. The documents also shed light on many other disputed episodes of the war: the timing of the Republican request for assistance from the Soviet Union; the rise and fall of the International Brigades; the internal workings of the Comintern and its influence on Spain; and much more. Authoritative and startling in the new information it offers, the book is essential reading for anyone interested in Soviet foreign policy or the Spanish Civil War. 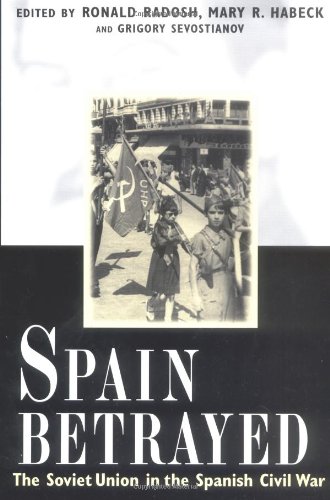 Spain Betrayed: The Soviet Union in the Spanish Civil War