Storm of Steel: The Development of Armor Doctrine in Germany and the Soviet Union, 1919–1939

In this fascinating account of the battle tanks that saw combat in the European Theater of World War II, Mary R. Habeck traces the strategies developed between the wars for the use of armored vehicles in battle. Only in Germany and the Soviet Union were truly original armor doctrines (generally known as “blitzkreig” and “deep battle”) fully implemented. Storm of Steel relates how the German and Soviet armies formulated and chose to put into practice doctrines that were innovative for the time, yet in many respects identical to one another.

As part of her extensive archival research in Russia, Germany, and Britain, Habeck had access to a large number of formerly secret and top-secret documents from several post-Soviet archives. This research informs her comparative approach as she looks at the roles of technology, shared influences, and assumptions about war in the formation of doctrine. She also explores relations between the Germans and the Soviets to determine whether collaboration influenced the convergence of their armor doctrines. 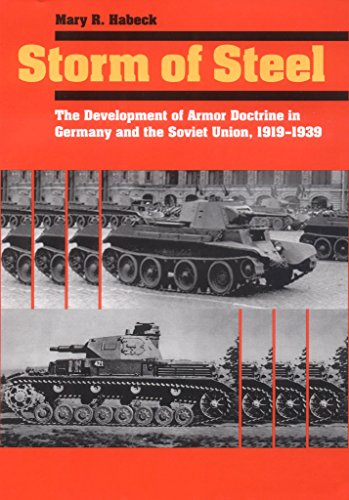 Storm of Steel: The Development of Armor Doctrine in Germany and the Soviet Union, 1919–1939