The Berber Identity Movement and the Challenge to North African States

Like many indigenous groups that have endured centuries of subordination, the Berber/Amazigh peoples of North Africa are demanding linguistic and cultural recognition and the redressing of injustices. Indeed, the movement seeks nothing less than a refashioning of the identity of North African states, a rewriting of their history, and a fundamental change in the basis of collective life. In so doing, it poses a challenge to the existing political and sociocultural orders in Morocco and Algeria, while serving as an important counterpoint to the oppositionist Islamist current.

This is the first book-length study to analyze the rise of the modern ethnocultural Berber/Amazigh movement in North Africa and the Berber diaspora. Bruce Maddy-Weitzman begins by tracing North African history from the perspective of its indigenous Berber inhabitants and their interactions with more powerful societies, from Hellenic and Roman times, through a millennium of Islam, to the era of Western colonialism. He then concentrates on the marginalization and eventual reemergence of the Berber question in independent Algeria and Morocco, against a background of the growing crisis of regime legitimacy in each country. His investigation illuminates many issues, including the fashioning of official national narratives and policies aimed at subordinating Berbers in an Arab nationalist and Islamic-centered universe; the emergence of a counter-movement promoting an expansive Berber “imagining” that emphasizes the rights of minority groups and indigenous peoples; and the international aspects of modern Berberism. 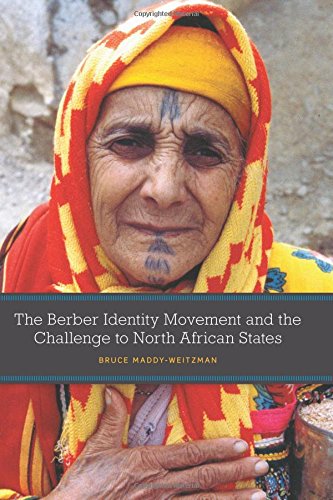 The Berber Identity Movement and the Challenge to North African States

Bruce Maddy-Weitzman was a Senior Fellow in the Foreign Policy Research Institute’s Program on the Middle East. He is the Marcia Israel Principal Research Fellow at the Moshe Dayan Center for Middle Eastern and African Studies at Tel Aviv University.