By mid-2015, the Obama presidency will be entering its final stages, and the race among the successors in both parties will be well underway. And while experts have already formed a provisional understanding of the Obama administration’s foreign policy goals, the shape of the “Obama Doctrine” is finally coming into full view. It has been consistently cautious since Obama was inaugurated in 2009, but recent events in the Middle East, Eastern Europe, and the Far East have led an increasingly large number of foreign policy experts to conclude that caution has transformed into weakness.

In The Obama Doctrine, Colin Dueck analyzes and explains what the Obama Doctrine in foreign policy actually is, and maps out the competing visions on offer from the Republican Party. Dueck, a leading scholar of US foreign policy, contends it is now becoming clear that Obama’s policy of international retrenchment is in large part a function of his emphasis on achieving domestic policy goals. There have been some successes in the approach, but there have also been costs. For instance, much of the world no longer trusts the US to exert its will in international politics, and America’s adversaries overseas have asserted themselves with increasing frequency. The Republican Party will target these perceived weaknesses in the 2016 presidential campaign and develop competing counter-doctrines in the process. Dueck explains that within the Republican Party, there are two basic impulses vying with each other: neo-isolationism and forceful internationalism. Dueck subdivides each impulse into the specific agenda of the various factions within the party: Tea Party nationalism, neoconservatism, conservative internationalism, and neo-isolationism. He favors a realistic but forceful US internationalism, and sees the willingness to disengage from the world by some elements of the party as dangerous. After dissecting the various strands, he articulates an agenda of forward-leaning American realism–that is, a policy in which the US engages with the world and is willing to use threats of force for realist ends.

The Obama Doctrine not only provides a sharp appraisal of foreign policy in the Obama era; it lays out an alternative approach to marshaling American power that will help shape the foreign policy debate in the run-up to the 2016 elections. 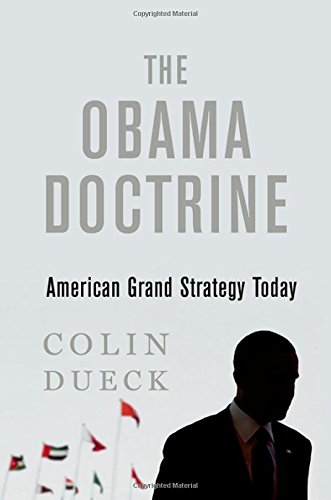