Treasury’s War: The Unleashing of a New Era of Financial Warfare

For more than a decade, America has been waging a new kind of war against the financial networks of rogue regimes, proliferators, terrorist groups, and criminal syndicates. Juan Zarate, a chief architect of modern financial warfare and a former senior Treasury and White House official, pulls back the curtain on this shadowy world. In this gripping story, he explains in unprecedented detail how a small, dedicated group of officials redefined the Treasury’s role and used its unique powers, relationships, and reputation to apply financial pressure against America’s enemies.

This group unleashed a new brand of financial power—one that leveraged the private sector and banks directly to isolate rogues from the international financial system. By harnessing the forces of globalization and the centrality of the American market and dollar, Treasury developed a new way of undermining America’s foes. Treasury and its tools soon became, and remain, critical in the most vital geopolitical challenges facing the United States, including terrorism, nuclear proliferation, and the regimes in Iran, North Korea, and Syria.

This book is the definitive account, by an unparalleled expert, of how financial warfare has taken pride of place in American foreign policy and how America’s competitors and enemies are now learning to use this type of power themselves. This is the unique story of the United States’ financial war campaigns and the contours and uses of financial power, and of the warfare to come. 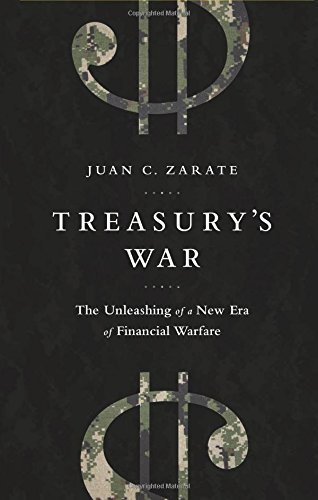 Treasury's War: The Unleashing of a New Era of Financial Warfare

Juan Zarate is the Chairman and Co-Founder of the Financial Integrity Network, the Chairman and Senior Counselor for the Foundation for Defense of Democracies’ Center on Sanctions and Illicit Finance (CSIF), and the Senior National Security Analyst for NBC News and MSNBC. He is also a Visiting Lecturer of Law at the Harvard Law School, a Senior Adviser at the Center for Strategic and International Studies (CSIS), and a Senior Fellow to the Combating Terrorism Center at West Point.