Why the UK Voted for Brexit: David Cameron’s Great Miscalculation

This book studies the unprecedented decision of 23 June 2016, which saw the UK electorate vote to leave the EU, turning David Cameron’s referendum gamble into a great miscalculation. It analyzes the renegotiation that preceded the vote, before examining the campaign itself so as to understand why the government’s strategy for winning foundered. It then evaluates the implications that this decision has for the country’s international relations as well as for its domestic politics. The author’s final reflections are on the political philosophy of Brexit, which is founded on a critique of representative democracy. Yet the use of direct democracy to trigger EU withdrawal leaves the supposedly sovereign British people at an impasse. For it is up to the people’s representatives to negotiate the terms of Brexit. By engaging with a highly charged political debate in an accessible and non-partisan manner this book will appeal to a broad readership of academics, policy-makers, journalists, and interested citizens. 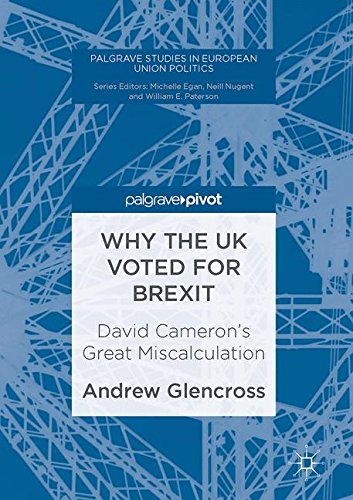 Why the UK Voted for Brexit: David Cameron's Great Miscalculation

Formerly a FPRI Senior Fellow, Andrew Glencross is Senior Lecturer in the Department of Politics and International Relations at Aston University. His most recent book is Why the UK Voted for Brexit: David Cameron’s Great Miscalculation (Palgrave, 2016)