This is a thorough survey of the key issues that surround the relations between the military and its civilian control in the US today. Civil-military relations in America have essentially been a bargain to determine the responsibilities and prerogatives of the civilian leadership on one hand and the military on the other. Circumstances, be they political, social, or other, may render the terms of the bargain obsolete, resulting in tensions that call for their renegotiation. For example, substantial renegotiation of civil-military relations took place at the end of the Cold War and after the attacks of 9/11. Such debates bring on new answers to the four questions that lie at the heart of civil-military relations: Who controls the military and how? Who serves? What is the appropriate role of the military? and What degree of military influence is appropriate in a liberal society? “US Civil-Military Relations After 9/11” examines the answers to these questions in their historical context, both pre- and post-9/11. This timely work will be an essential text for anyone studying public policy, civil-military relations, and securities studies. 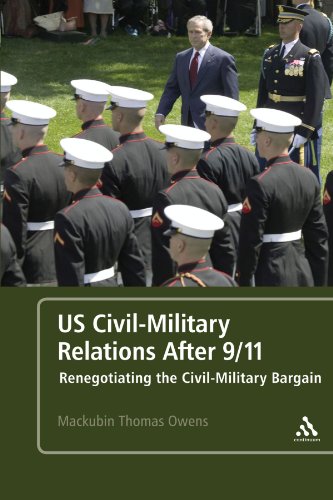