For almost two decades, Chinese strategists have worried about what they regard as the geopolitical encirclement of China. At various times, they have attributed that encirclement to the United States, then India, and most recently Japan.[1] No doubt last week’s large-scale naval exercise in the western Pacific did little to dispel their concerns. For the first time warships from India, Japan, and the United States jointly conducted anti-air and anti-submarine drills in the Philippine Sea, an area directly adjacent to the Chinese-claimed waters of the East and South China Seas. 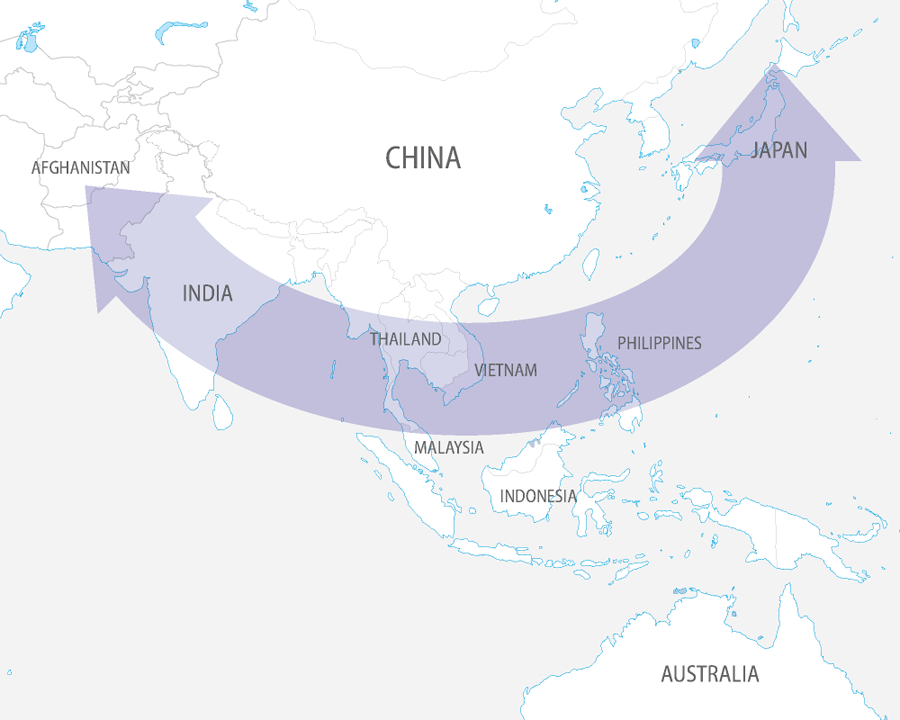 Events over the past month likely added to China’s concerns. Last Friday, Indian Prime Minister Narendra Modi visited Bangkok in part to expand his country’s defense and maritime security cooperation with Thailand. A week earlier, he met with President Barack Obama at the White House, highlighting India’s closer ties with the United States. At a summit in late May, the United States and Japan, along with other Group of Seven countries, openly voiced their concern over China’s maritime actions. Days before the summit, Obama flew to Hanoi where he lifted the long-standing U.S. arms embargo against Vietnam, one of China’s South China Sea antagonists. Then after the summit, Japanese Prime Minister Shinzō Abe welcomed a Vietnamese delegation to discuss how they could enhance their military cooperation.

Certainly Chinese concerns over encirclement are not new. During the Cold War, China worried about the Soviet Union pursuing a similar geopolitical strategy. Even earlier, the Chinese Communist Party faced several all too real “encirclement campaigns” during China’s long civil war. Those experiences could have left an imprint may have left their imprint on China’s strategic thinking ever since.

What is clear is that Asia-Pacific countries have begun to prepare for what could be an era of heightened tensions. Such hedging has recently accelerated, as Chinese behavior in the East China Sea, South China Sea, and on its border with India has grown increasingly muscular. The United States has pursued its “pivot” or “rebalance” toward Asia, which shifted the bulk of American naval might to the Pacific. India and Japan have boosted their diplomatic and economic engagement in Southeast Asia and strengthened their military postures. Other countries have begun to do the same. As Australia’s 2016 defense white paper warned, “competing claims for territory and natural resources [in the region]… could undermine stability.”[2] But does such hedging constitute an encirclement of China?

In the early 2000s, China agonized over a possible American encirclement on its western border as U.S. forces streamed into Afghanistan and Central Asia. But a decade later, a persistent insurgency had worn down the United States and its allies. U.S. military bases in Kyrgyzstan and Uzbekistan were closed; America’s once-close relationship with Pakistan became acrimonious; and U.S. forces began their long withdrawal. China’s concern never materialized.

Now Beijing fears an even wider encirclement by the countries along the Asia-Pacific periphery, as they hedge against China’s assertive behavior. But most of them are still in the early stages of building up their strength. Although Australia has launched an ambitious military modernization program, its forces remain small. India’s defense bureaucracy continues to frustrate its military’s modernization and expansion plans. While Japan fields highly capable forces, its fragile economy constrains its military’s ability to grow. Even America’s “pivot” toward Asia may not be as weighty as it sounds, as the Obama administration has trimmed the overall size of the U.S. Navy. Hence, one could argue that China’s concern over an encirclement is, at least for the moment, not wholly warranted.

Besides, the countries that China fears will encircle it are not yet a cohesive bunch. Officially non-aligned, India remains skittish about is relationship with the United States. And while Australia and Japan have security treaties with the United States, they do not have strong ties with each other. That was evident when Australia, at the last minute, chose to purchase France’s Scorpene-class submarine over Japan’s Sōryū-class submarine for its next-generation submarine fleet. India’s security relationships with Australia and Japan are equally tenuous. China could use bilateral deals to weaken those relationships and hinder a nascent encirclement from coalescing any further.

Breakout of the Encirclement

But even if China’s fear was to manifest itself, Beijing is already developing the means to break out of it. In late 2013, China turned heads across Asia with its “One Belt, One Road” initiative. Among the many infrastructure projects it has financed in Southeast Asia are a special economic zone in Cambodia, hydroelectric dams in Laos, and energy and railway projects in Malaysia. While China’s “yuan diplomacy” has not always been successful, it has had an impact. Cambodia and Laos have become reliable advocates for China within ASEAN. Malaysia largely remains on the sidelines of the South China Sea dispute, despite a rising number of Chinese infringements of its exclusive economic zone. China’s initiative may prove useful even in the Philippines, which has been a thorn in Beijing’s side. The Philippines’ new president, Rodridgo Duterte, has indicated that he would undertake the bilateral dialogue that China has long sought in exchange for Chinese economic development assistance.

Benefit of the Encirclement

Still, Beijing may have reason to play up its fears of encirclement. Despite its remarkable economic achievements, China faces a host of problems. Today, Chinese leaders must manage their country’s difficult transition from investment-led growth to expansion by private consumption, while dealing with its various debt-fueled bubbles. Even under the best conditions, those challenges are bound to be volatile. So some may see fears of encirclement as a way to rally public sentiment and maintain the “social stability” needed to ensure the longevity of communist rule. In any case, whether the “encirclement of China” is imagined or real, effective or not, one can expect the phrase to remain in Beijing’s lexicon for years to come.