Carnage and Connectivity: Landmarks in the Decline of Conventional Military Power

The burgeoning of global connectivity in recent decades is without historical parallel and the ‘wiring up’ of the world continues apace, even in the poorest regions. Flux and ever-quickening change are the leitmotifs of the ‘information age’ across a swathe of human enterprise from industry and commerce through to politics and social relations. This is no less the case for the patterns of war, where change has been disorientating for soldiers and statesmen whose confidence in the old, the traditional, and the known has been shaken.

David Betz’s book explains the huge and disruptive implications of connectivity for the practice of warfare. The tactical ingenuity of opponents to confound or drop below the threshold of sophisticated weapons systems means war remains the realm of chance and probability. Increasingly, though, the conflicts of our time are less contests of arms than wars of hearts and minds conducted on a mass scale through multimedia communications networks. The most pernicious challengers to the status quo are not states but ever more powerful non-state actors. 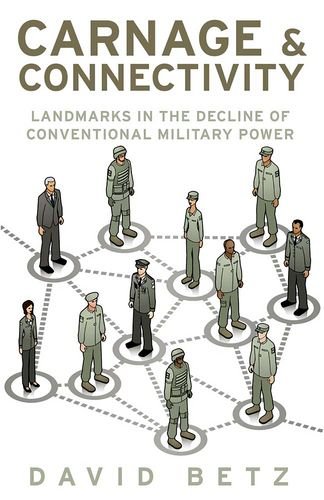 Carnage and Connectivity: Landmarks in the Decline of Conventional Military Power

David J. Betz, an FPRI Senior Fellow in the Program on National Security, is a Professor in the Department of War Studies, King’s College London, where he heads the Insurgency Research Group and is Academic Director of the on-line master’s degree, War in the Modern World.