The University Gets Religion: Religious Studies in American Higher Education

In The University Gets Religion: Religious Studies in American Higher Education, historian D. G. Hart examines the rise of religion to its current place as one of the largest academic disciplines in contemporary higher education. Protestant ministers and faculty, arguing for the importance of religion to a truly “liberal” education, were especially influential in staffing departments and designing curricula to reflect their own assumptions about the value of religion not just for higher education but for American culture in general.

But the success of mainstream Protestantism in fostering the academic study of religion has become the field’s greatest burden. Religion scholars have distanced themselves from traditional Protestant orientations while looking for topics better suited to America’s cultural diversity. As a result, religion is in the awkward position of being one of the largest scholarly disciplines while simultaneously lacking a solid academic justification. It may be time, Hart argues, for academics to stop trying to secure a religion-friendly university. 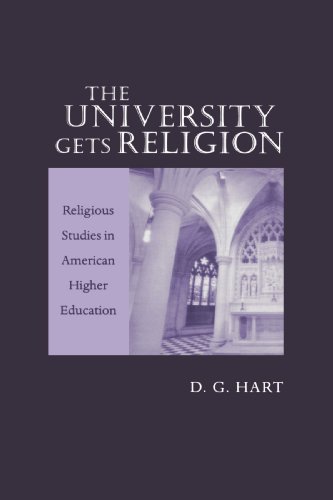 The University Gets Religion: Religious Studies in American Higher Education