A Nation Must Think Before it Acts Vanguard of the Imam: Religion, Politics, and Iran’s Revolutionary Guards
Share: Vanguard of the Imam: Religion, Politics, and Iran’s Revolutionary Guards

Iran’s Revolutionary Guards are one of the most important forces in the Middle East today. As the appointed defender of Iran’s revolution, the Guards have evolved into a pillar of the Islamic Republic and the spearhead of its influence. Their sway has spread across the Middle East, where the Guards have overseen loyalist support to Bashar al-Assad in Syria and been a staunch backer in Iraq’s war against ISIS-bringing its own troops, Lebanon’s Hezbollah, and Shiite militias to the fight. Links to terrorism, human rights abuses, and the suppression of popular democracy have shrouded the Revolutionary Guards in controversy.

In spite of their prominence, the Guards remain poorly understood to outside observers. In Vanguard of the Imam, Afshon Ostovar has written the first comprehensive history of the organization. Situating the rise of the Guards in the larger contexts of Shiite Islam, modern Iranian history, and international affairs, Ostovar takes a multifaceted approach in demystifying the organization and detailing its evolution since 1979. Politics, power, and religion collide in this story, wherein the Revolutionary Guards transform from a rag-tag militia established in the midst of revolutionary upheaval into a military and covert force with a global reach.

The Guards have been fundamental to the success of the Islamic revolution. The symbiotic relationship between them and Iran’s clerical rulers underpins the regime’s nearly unshakeable system of power. The Guards have used their privileged position at home to export Iran’s revolution beyond its borders, establishing client armies in their image and extending Iran’s strategic footprint in the process. Ostovar tenaciously documents the Guards’ transformation into a power-player and explores why the group matters now more than ever to regional and global affairs. The book simultaneously serves as a history of modern Iran, and provides a crucial and engrossing entryway into the complex world of war, politics, and identity in the Middle East. 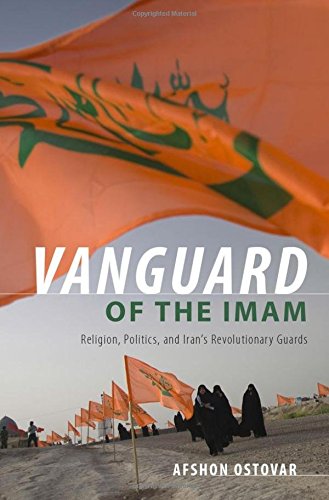 Vanguard of the Imam: Religion, Politics, and Iran's Revolutionary Guards