A Nation Must Think Before it Acts Nordic-Baltic Cooperation: A Balance Sheet
Share:
E-Notes 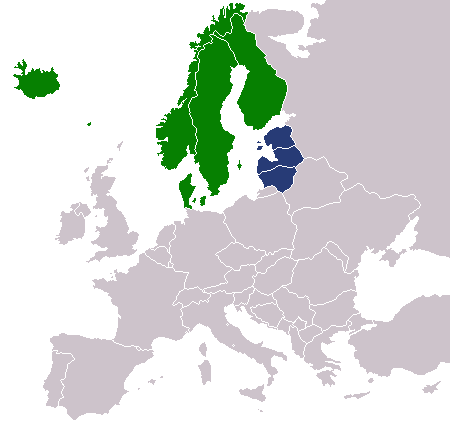 The Baltic States see Russia as an existential threat. Among the Nordic countries, NATO non-members Finland and Sweden have lately been subject to numerous Russian military incursions, both air and maritime. In 2014 Russian planes threatened to violate NATO airspace in the Nordic-Baltic region on average more than once daily.[1] Many times they actually violated NATO airspace, before being escorted away. In perhaps the greatest provocation, last year Russian agents crossed the Estonian border to abduct an Estonian internal security officer sentenced to 15 years in a Russian prison before being released back to Estonia in early October.[2] Cyber-attacks on several area governments have been traced to Russia, providing further evidence of hostility. Can Nordic-Baltic cooperation help provide a common defense?

During the last decade, however, the Baltic Assembly has been increasingly superseded by cooperation among the national executive branches, which reported directly to their respective national parliaments.[4] In 2010 the highly influential “NB8 Wise Men Report” recommended embedding Baltic Assembly cooperation with the Nordic Council in a broader institutional framework that unites Baltic and Nordic officials.[5] Inter-parliamentary cooperation was superseded by inter-executive and foreign-affairs coordination.

There have been thee stages to the evolution of Nordic-Baltic cooperation since the end of the Cold War. Change has been driven by internal and external factors. In the first phase, Nordic-Baltic cooperation tended to be bilateral, involving pairs of states from different groupings. In the second phase, each region consolidated its own internal cooperation. In the third phase, the Baltic and Nordic countries have consolidated their mutual cooperation and sought to address external challenges.[6]

In more detail: During the first stage, from the mid-1990s until about ten years ago, while the Baltic States were trying to re-establish their own mutual diplomatic cooperation, they also cooperated with the Nordic countries to prepare for EU membership. Mainly on the basis of historical and cultural ties, Finland informally became the Estonian “lobby” (propelled by similar language origins, tourism, and investment) and Sweden the Latvian lobby (historical ties back to the Swedish Empire plus Latvian diaspora in Sweden), while non-Nordic Poland became the Lithuanian lobby (harking back to their historical Commonwealth and more recent geopolitical common interests).[7]

In the second stage, following the Baltic States’ accession to both the EU and NATO in mid-2004, they sought over the course of the following decade, to rationalize their cooperation as a group, including inside the EU. The creation of the Nordic-Baltic 6 (NB6) group complemented the Baltic States’ accession to the EU. The EU and the EP provided the Baltic States many opportunities to constitute themselves as an informal group and to encounter other such informal regional groupings as the Nordic countries also acting as a group. So inter-regional cooperation within the European context became a new focus.

The third stage of this evolution is in evidence since 2014. External circumstances have driven the Baltic and Nordic groups to coordinate common perspectives, positions, and actions not just regarding regional or EU questions, but also regarding Russia. This stage includes a southward enlargement of Nordic-Baltic cooperation to include explicitly the Visegrád group, comprising Czech Republic, Hungary, Poland, and Slovakia. Interestingly, this development has led to the BA’s mild renaissance by expanding the universe of its potential partners.

One would expect the same to occur in the future regarding Baltic cooperation more generally, as the region becomes institutionally better networked with other neighboring regions. This phenomenon occurs in the context of the ongoing consolidation of post-Cold War geo-economics, often strongly influenced by international energy flows and cooperation, of which the EU’s Energy Union initiative is only the most striking recent example. In particular, the newly renovated program of “Trans-Europe Networks: Energy” (TEN-E) includes significant projects to enhance integration of inter-Baltic and Nordic-Baltic gas pipeline and electricity distribution networks.

Conclusion and Prospects for the Future

The scope of Nordic-Baltic cooperation in the NB8 format began to deepen only in the years following 2000, when a joint foreign-ministerial meeting hosted by Denmark decided on a new format. Denmark is the only Nordic member of both NATO and the EU, and also the only one having, through its geography, security interests in both the Arctic Sea and Baltic Sea. One might suppose, therefore, that Denmark would be an ideal “hinge” for swinging the Nordic countries and the Baltic States into a real cooperative venture.

Notwithstanding Denmark’s diplomatic prestige, its size does not give the weight for creating great momentum. Nevertheless, it was Denmark that catalyzed the transformation of “5+3” cooperation into the NB8. This year Denmark has succeeded in further catalyzing the cooperation between the NB8 and the V4, begun under Swedish impetus in 2013. The addition of the V4 as a third “pole” of cooperation could mollify conflicting interests between the Nordic and Baltic groups, particularly as regards preoccupation with Arctic vs. Baltic Sea issues. Poland, the only V4 country with a coast on the Baltic Sea, is the natural geo-strategic link from the V4 to the Baltic region and the Arctic region.

Against this background, Nordic-Baltic defense-coordination questions enjoyed a first renaissance following the 2008 Russian invasion of Georgia. A succession of ad hoc post–Cold War adaptations coalesced by 2009 into the Nordic Defense Cooperation (NORDEFCO), comprising NATO members Denmark, Iceland, and Norway plus non-NATO members Finland and Sweden. [8] NORDEFCO was from the beginning limited only to logistics cooperation and resource sharing. Even with respect to those limited goals, however, one report found in 2013 that “many of the cooperation proposals investigated did not meet established cost and efficiency criteria.”[9]

The question of Swedish or Finnish accession to NATO is not for the moment a prospect. Swedish government circles continue to cling to the image of neutrality or non-alignment inherited from their Cold War-era diplomatic profile. A growing minority of Swedish public opinion does, however, seem to favor the idea. However, for historical reasons of Finnish deference to Russia (it was part of the Tsarist Empire and pursued “Finlandization” during the Cold War), Finland will not consider joining NATO until at least Sweden has done so. A recent German analysis has nevertheless concluded that even if “Nordic-Baltic military integration in the direction of collective defense [is] severely limited,” still it could be a “role model” for Visegrád-group or Black Sea security cooperation.[10]

[1] David Mardiste and Jonathan Saul, “NATO scrambles jets 400 times in 2014 as Russian air activity jumps,” Reuters, 20 November 2014, at https://www.reuters.com/article/2014/11/20/us-ukraine-crisis-nato-stoltenberg-idUSKCN0J41H520141120#EE4rmzoFRdqSmRxZ.99 Not every one of these incidents was a response to an actual violation, although they helped to prevent incursions. For a list of roughly twice-weekly incursions from early November 2014 through mid-March 2015, see Thomas Frear (comp.), “New incidents following the publication of ELN report Dangerous Brinkmanship, November 2014 to 12 March 2015,” European Leadership Network, [13 March 2015], at https://www.europeanleadershipnetwork.org/medialibrary/2015/03/11/4264a5a6/ELN%20Russia%20-%20West%20Full%20List%20of%20Incidents.pdf.

[3] A note on terminology: the Nordic countries include Denmark, Iceland, Norway, Sweden, and Finland; hence “NB8” refers to cooperative arrangements among the five Nordic countries and the three Baltic countries (Estonia, Lithuania, and Latvia). NB6 is the same as the NB8 minus Iceland and Norway. The Visegrad Four, or V4, refers to Hungary, Poland, the Czech Republic, and Slovakia.

[4] For a comprehensive review of the entire spectrum of Baltic cooperation organizations at the time of the BA’s “reform period,” see Christiane Kasack, “Interaction of Inter-parliamentary with Inter-governmental Bodies: The Example of the Baltic Sea Region,” in Andres Kasekamp (ed.) The Estonian Foreign Policy Yearbook 2005 (Tallinn: Estonian Foreign Policy Institute, 2006), pp. 135–53.

[6] In more technical terms: In the first stage of its evolution, the BA showed itself capable of fundamental restructuring but lacked the resources to create and conserve any depth of institutional memory. In the second stage, it succeeded in institutionalizing an inner rearrangement but only through an external imposed driver (the NC), vitiating its own steering capacity. In the oncoming third stage, swamped by information channels that it cannot control, the BA is losing all autonomy while nevertheless gaining a modest degree of power by virtue of becoming more widely networked. For details on this organizational “cybernetic learning” analysis, see Robert M. Cutler, “International Parliamentary Institutions as Organizations,” Journal of International Organizations Studies 4:Special Issue (2003), pp. 105–26, which takes the Baltic Assembly as a case study.

[7] For an examination of this development through the perspective of historical Nordic normative internationalism, see: Annika Bergman, “Adjacent Internationalism: The Concept of Solidarity and Post-Cold War Nordic–Baltic Relations”, Cooperation and Conflict 41:1 (March 2006), pp. 73–97.

[9] “Nordic Logistic Cooperation Stalls”, Defense News (17 July 2013), available at https://www.defensenews.com/article/20130717/DEFREG01/307170018/Nordic-Logistics-Collaboration-Stalls. See also Pauli Järvenpää, “Nordic Defense Cooperation: NORDEFCO and Beyond,” in Ann-Sofie Dahl and Pauli Järvenpää (eds.), Northern Security and Global Politics: Nordic-Baltic Strategic Influence in a Post-unipolar World (New York: Routledge, 2013), pp. 137–54; Clive Archer and Pertti Joenniemi, “Nordic Security and Defence Cooperation,” in Johan Strang (ed.), Nordic Cooperation: A European Region in Transition (New York: Routledge, 2015); and Håkon Lunde Saxi, Nordic Defence Cooperation after the Cold War (Oslo: Norwegian Institute for Defence Studies, March 2011), which concludes (p. 72), that “if Nordic defence cooperation is to be a success it must remain as an unequivocal complement to NATO and the CSDP, maintain its chief advantage of being small, nimble and homogeneous by being careful about accepting new members, and manage potential domestic opposition by delivering visible quid pro quos which benefit all participating countries equally.” A more general argument against autonomy, and in favor of Western engagement, is set out by Mindaugas Jurkynas, “Security Concerns of the Baltic States in the Twenty-first Century,” in Clive Archer, Alyson J.K. Bailes, and Anders Wivel (eds.), Small States and International Security: Europe and Beyond (New York: Routledge, 2014), pp. 113-29.