A Nation Must Think Before it Acts Letter from the Editor – Issue 3
Share: 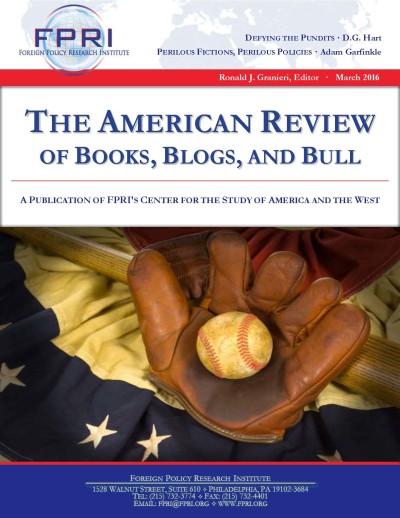 Letter from the Editor – Issue 3 When warned that his willingness to strike compromises on difficult questions would hurt his political career, Henry Clay offered in response the immortal line: “I’d rather be right than President.” That has become one of the most famous quotations in American political history, though one could also say it is honored more in the breach than the observance. Most political leaders, and those who support them, would prefer to believe that there is no need to choose between being in the right and being successful—if anything, the latter is sufficient proof of the former.

Such dour reflections are a product of a particularly polarizing and confusing election season. As Americans try to decide whom to elect President, they have debated what constitutes being right in a world where there is more frustration than hope, where past disappointment clouds the vision of followers and leaders, and where appealing to frustrated demands for total change is a more promising path to power than advocating compromise and restraint.

The American Review hopes to enrich our understanding of American political life by linking politics to larger trends in American culture society. This month’s two essays serve that mission by examining the often-chaotic intersection between politics and moral principle.

FPRI Associate Scholar Darryl Hart offers an analysis of the attraction between American Evangelical Christians and Donald Trump. Their mutual connection has come as something of a shock to many, but Professor Hart traces the connection between Evangelical attacks on the American political establishment and Trump’s blunt rhetoric. Even if one could not imagine Trump teaching Sunday school, it’s clear that his message is attracting plenty of evangelical support the other six days of the week.

The (dis-) connection between policy and morality also attracts the analytical gaze of FPRI Fox Fellow Adam Garfinkle, who has penned a review of a recent work on “the benefits and pitfalls of America’s alliances with authoritarian regimes” to reflect on how Americans think about the compromises inherent in making foreign policy. Garfinkle reminds us that Americans like to think of themselves as both principled and practical, while each observer reserves to herself the right to decide where to strike the balance between the two, and to point out where her fellow Americans fall short. Nobody ever quite gets it right, which only guarantees that the conversation will continue. Few things are more American than that.

If you want to be part of the conversation, please contact us here at the American Review. We look forward to hearing from you.