A Nation Must Think Before it Acts Surviving Taiwan’s Lame Duck Period
Share: 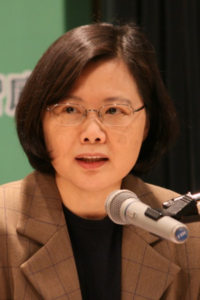 The interval between the election and inauguration of Taiwan’s new president has yielded both worrying developments and encouraging signs. Ambiguous signals, competing agendas, mixed messages and complex incentives make it hard to interpret these events, and the high stakes/low certainty atmosphere is putting enormous pressure on president-elect Tsai Ing-wen’s inaugural address. At the same time, however, the gloomiest predictions for what might happen during the lame duck period have not materialized. Indeed, the long interregnum has given Beijing and the incoming government time to communicate and prepare for the turnover of power next month.

One of the many unintended consequences of Taiwan’s piecemeal democratization process is a very long lame duck period. This year, the presidential election was held on January 16, but the inauguration will not take place until May 20 – fully four months later. In the lead-up to the election, many Taiwan watchers worried that this long interval would allow for mischief in both Taipei and Beijing.

One source of concern was the possibility that the outgoing administration of Ma Ying-jeou might abandon its responsibilities prematurely, leaving the country without a functioning executive. Those fears were heightened immediately after the election when then-premier Ma Chi-kuo led the cabinet in a mass resignation. At first, Ma suggested Tsai – whose party had also just won a commanding legislative majority – name a new premier, but she declined. In the end, Ma appointed a new premier and the government continued to function more or less normally.

An opposite concern was that the Ma administration might overstep its authority during the lame duck period and constrain his successor’s freedom of action. In particular, some in Tsai’s party worried that he would take actions on cross-Strait relations that would foreclose options the incoming government would prefer to keep open. Fears of Ma overstepping turned out to be justified, but not quite as expected.

Instead of trying to cement cross-Strait policy during his last months in office, Ma chose to leave his legacy in Taiwan’s policy toward the South China Sea. Perhaps this should not be surprising: Ma has had an interest in the South China Sea dispute since his student days. In any case, whatever his motivation, the past three months have seen a flurry of activity aimed at asserting Taiwan’s claims in the region and ensuring policy continuity on this issue.

The South China Sea issue is one on which DPP and KMT policies overlap significantly; nonetheless, Ma’s actions did create headaches for Tsai. Ma’s decision to visit Itu Aba/Taiping Island (an island in the South China Sea that Taiwan has occupied since World War II) in January earned a rare rebuke from the U.S.: a spokesperson at the American Institute in Taiwan, the de facto U.S. embassy in Taipei, called the visit “extremely unhelpful.”  Barely two weeks later, Taiwan’s Foreign Ministry’s announced that it would not accept a Hague-based arbitration court’s imminent decision on the South China Sea disputes. This rejection directly challenged President Barack Obama’s call a day earlier for all claimants to follow the court’s decision.

Although the DPP’s position on the South China Sea is similar to the KMT’s, Ma clearly wants to make the policy as strong and immutable as possible before leaving office. He indicated his distrust for the DPP’s management of the issue when he questioned Tsai about statements by various DPP-linked figures promoting different approaches to the issue. Under Ma’s questioning, Tsai distanced herself and her party from those positions, reaffirming the similarities in the two parties’ policies.

The Ma administration’s actions on this issue complicate matters for Tsai. Instead of taking office with a clean slate on the South China Sea dispute, Tsai will face questions about her position right from the start. Any deviation from Ma’s policy will bring unwanted friction with Beijing, but to affirm Ma’s approach will put the new government at odds with the U.S. And no matter what she does she stands to offend one or another domestic constituency.

In addition to providing time for political machinations in Taipei, the long lame duck period also gives Beijing time to fret and fuss as it waits uncomfortably for Tsai to take office and reveal her “true colors” regarding cross-Strait policy. On this front, the news is also mixed.

On the one hand, while the PRC persists in its strong demand that Tsai accept the ’92 Consensus[1] as the basis for continued cross-Strait interactions, there is some evidence that Tsai and the PRC leadership may be using the time between the election and the inauguration to search for ways to minimize the distance between the two sides. On the other hand, Beijing seems to be sending strong – albeit veiled – warnings that if Tsai does not meet its expectations, there will be unpleasant consequences.

Long before the January election, Tsai made it clear that she was seeking a middle road between acceding to the PRC’s demands regarding the ’92 Consensus and flat-out rejecting those demands. Her oft-stated goal of maintaining the status quo in the Strait – including a high level of economic cooperation – is supported by subtle, careful statements. The interplay between Tsai’s comments and those of PRC leaders support the theory that there is some communication between the two sides. Whether that will be sufficient to prevent a rupture remains to be seen.

Two statements made by PRC officials during the lame duck period are especially intriguing. PRC President Xi Jinping recently told delegates to China’s National People’s Congress, “If the historical fact of the ’92 consensus is recognized and if its core connotation is acknowledged, then the two sides of the Strait will have a common political basis and positive interaction can be preserved.” At a speech in Washington, Chinese Foreign Minister Wang Yi mentioned the “current constitution of Taiwan” as the basis of both the one-China claim and Tsai’s presidency.

Some of the language in Xi’s statement echoed Tsai’s previous remarks. A few days after taking office the president-elect told Taiwan’s Liberty Times, “In 1992, the two parties [the Straits Exchange Foundation and China’s Association for Relations Across the Taiwan Straits] from the two sides communicated and negotiated through an approach of mutual understanding and ‘seeking common ground while shelving differences,’ and I understand and respect this historical fact.”

Wang Yi’s acknowledgement that Taiwan has a constitution that stipulates that the mainland and Taiwan are both part of China is new. While Tsai’s party eschews the ’92 Consensus (which it sees as a post hoc invention of the KMT), the idea that the Republic of China constitution can be a vessel for Taiwan’s future has been a widely accepted DPP view since 1999. Tsai has been using the ROC constitution as the basis for developing cross-Strait relations for many months. Beijing walked back Minister Wang’s comment (which was not in his speech, but came in response to a question) after the Washington event, but for many observers, it was a welcome hint that a more realistic view of cross-Strait relations might be circulating in Beijing.

Tsai will not give in to Beijing’s demands, but her efforts to moderate her words and actions show that she is trying to close the gap between the two sides, and at the very least will not sabotage the relationship through inattention or posturing. Other actions reinforce this positive trend. Tsai’s selection of Lin Chuan, who is not a DPP member, as premier is one such sign. Several other members of the incoming cabinet have backgrounds similar to Lin’s. Another is the DPP legislative delegation’s decision to drop the words “mainland” and “China” from a recent bill, using instead Beijing’s preferred terminology, “cross-Strait.”

Overshadowing these “green shoots” in cross-Strait relations are many less encouraging signs. While Tsai herself has been restrained and responsible, she has not been able to restrain entirely the enthusiasm of her party’s newly-minted parliamentary majority. The DPP participated in an effort in the legislature to repeal legislation that outlawed alterations to passports. Activists have been encouraging Taiwanese to affix stickers that change the national title on their passports to read “Republic of Taiwan.” It is a symbolic gesture that has caused some Taiwanese travelers to be turned away at international borders, but the legislature has affirmed the right of Taiwanese to take this risk.

Meanwhile, the PRC is backing up its insistence that Tsai accept its preconditions for continuing the development of cross-Strait relations with actions that – while deniable – have ominous implications. According to Taiwan’s Minister of Transportation and Communications, Beijing has cut the number of travel permits it is issuing to Taiwan-bound tourists, which may lead to a double-digit decline in the number of visitors. Taiwan has invested heavily in infrastructure for mainland tourists, so closing the spigot will be costly.

Beijing also appears to be flexing its muscles on the international scene. In March, the PRC and Gambia announced plans to establish diplomatic relations. Gambia broke ties with Taiwan several years ago, but Beijing, honoring a tacit “diplomatic truce” with the Ma administration, declined to pick up Gambia as a diplomatic partner. The decision to do so now suggests the truce was, indeed, with Ma, and may not be transferable to a Tsai administration. The most recent international incident – in which Kenyan authorities deported a group of Taiwanese to the PRC rather than sending them home – also may be intended as a message to Tsai. In sum, these incidents seem to say, “If we are not satisfied with your performance, many things will go wrong.” Certainly, the Beijing leadership is well aware that if Tsai is perceived as incapable of protecting Taiwan’s fragile international position, her domestic position will weaken.

Tsai’s inauguration will take place in less than a month. The PRC has little incentive to relax its demands in advance of that event; applying maximum pressure now may yield the best possible outcome on May 20. Nonetheless, both sides need to ensure that actions taken now, in the lame duck period, do not create unnecessary barriers to progress later. The result is a four month interval full of signs and portents, sound and fury, the meaning of which will become clear only after the lame duck has waddled off the stage.

[1] The ’92 Consensus was coined as a label for a tacit agreement made by Taipei and Beijing’s semi-official representatives at a meeting in Hong Kong in 1992. The representatives acknowledged that both sides believed Taiwan to be part of China, but they left unspecified exactly what they meant by “China.” This allowed the PRC to move forward with negotiations on the grounds that the Taiwanese were in line with Beijing’s one-China principle, and it allowed Taiwan to continue to define “China” as the Republic of China (the state on Taiwan). Beijing typically stresses the “one China” component of the consensus, while Taipei emphasizes the unspecified nature of “China,” by articulating the consensus as “One China, with each side having its own interpretation.” For the DPP, this whole concept is problematic, both because many in the DPP reject the idea that Taiwan is part of China in any sense, and because they believe the label “’92 Consensus” is a post hoc exaggeration of what actually happened at the ’92 meeting. For this reason, Tsai Ing-wen has avoided endorsing the phrase itself, although she has acknowledged the value and utility of the ’92 meeting.