A Nation Must Think Before it Acts South Korea’s Lurking Dangers: From Impeachment to Foreign Policy Paralysis
Share: 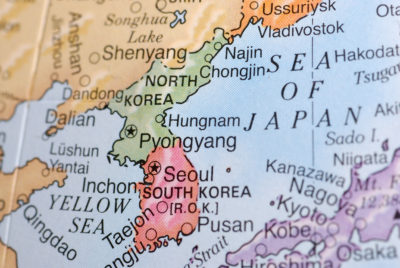 South Korea is marooned in perilous seas with its ship in more danger of careening off course than at any time since the end of the Cold War. The recent impeachment of President Park Geun-hye, leading to a possible late spring election of a new president, brings to the fore domestic troubles, while external ones are building, too. Given the vitality of its democracy—massive demonstrations conducted peacefully, transfers of power with grace, and impeachment with remarkable civility and the rule of law—the ship may be steadied for a time. Also, given its remarkable record of economic growth, there may yet be a way to overcome the alarm that slow growth or stagnation cannot be avoided—caused by a slowdown and more competitiveness in China, a reduction in the labor force, and state-business relations in disrepute. But the underlying conditions—domestic and foreign—likely to be present in 2017 are far more serious than many anticipate. Below, I point to the conditions that will make it hard for Korea, its neighbors, and key partners to agree on a sustainable course in such a turbulent regional environment.

Let us consider what makes South Korea’s situation perilous. First, the symbols of a successful foreign policy, which largely managed to unite the country in 2015, hit a dead-end in 2016, and their revival appears to be highly problematic. Trustpolitik to North Korea ended with the North’s fourth nuclear test. The honeymoon with China came to a crashing halt with Xi Jinping’s refusal to even return phone calls after this test and, later, China’s outrage over the decision to join the United States in deploying Terminal High Altitude Area Defense (THAAD). Park’s Eurasian initiative toward Russia suffered a similar fate when Vladimir Putin blamed South Korea for suspending the three-way cooperation with North Korea, specifically in the shipment of Russian coal via the North’s Rason port to South Korea and beyond. Seoul’s appeals to join a Northeast Asian Peace and Cooperation Initiative (NAPCI) likewise floundered, as, one after the other, countries found no prospect for a new multilateral organization to build trust. Uniting Koreans against Japan over the comfort women issue was disavowed by Park Geun-hye in a December 28, 2015 deal with Japan, which the Korean people largely opposed. Finally, claims that US-ROK relations are better than ever have been exposed as superficial given deepening concerns about clashing agendas. With old directions cast aside, there is no new navigational aid for Park’s successor regime.

Park’s foreign policy had raised expectations excessively. She urged citizens to plan for the “bonanza” of reunification, while the North Korean threat was intensifying. Many Koreans talked about the opportunities of being a “middle power” when diplomatic options were narrowing in a more polarized region. Yet, the legacy of the Sunshine Policy from 1998 to 2008 endured, as she tried to find a middle road between it and the Lee Myung-bak era (2008-2013) retreat to reinforcing the U.S. alliance and eyeing “Global Korea” as if the regional environment could be brushed aside. This failure led Park to fall back on the U.S. alliance plus agreeing to U.S.-led trilateralism with Japan in security, which progressives are resisting in favor of some earlier foreign policy initiatives.

Second, Park’s impeachment is not just the repudiation of one leader caught in a seedy scandal, but the impugning of the nexus of executive power, state-business relations, and restricted, unfair social mobility. Turning to the harshest critics of these conditions increases the prospects of idealistic responses with uncertain results at home and, more clearly, a negative foreign policy impact. Nostalgia for the Sunshine Policy among progressives, who are favored to return to power, defies new realities. Even if Ban Ki-moon were to overcome the odds and win the election—perhaps by joining with the People’s Party—a softer policy could follow toward North Korea, straining ties with the United States and Japan. Yet, the most serious damage would come from the progressives upending a decade of close coordination with the United States at a time of U.S. determination to cut short the threat of nuclear attack from North Korea regardless of South Korean intentions.

Third, the incoming Trump administration poses new risks for the nation.  It has long been understood that the worse Sino-U.S. relations are, the worse it is for South Korea. Trump’s targeting of China makes any aspirations to keep good relations with both sides less tenable. Sino-U.S. relations have reached a point where Seoul no longer has the luxury of envisioning itself as a bridge between the two or a state capable of staying aloof from clashes, such as in the South China Sea or over Taiwan. Trump’s contempt for diplomacy as usual and multilateralism also threatens delicate balancing acts critical to managing relations in East Asia. If, as many expect, Japanese Prime Minister Abe Shinzo cozies up to Trump and seizes the opportunity to boost Japan’s military posture—including offensive missiles— South Korean opposition would put it on a collision course with the United States. There are other concerns. Would Trump be willing to cut a deal with North Korea, curtailing its capacity to strike the United States at the expense of South Korean security? How would a deal between Trump and Putin affect South Korea, given Putin’s opposition to THAAD and inclination to boost North Korea? At a time when Abe is rushing to solidify ties to Washington, Seoul stays mired in crisis with little chance to prepare for Trump.

The scene is set for a stormy start to the next Korean presidency. Just as China has targeted Taiwan for signs of a shift in U.S.-Taiwan relations, it, too, has threatened South Korea for allowing the Obama administration to install THAAD and is poised to put more economic pressure on the South. Should a new president decide to revoke the “comfort women” agreement and the more recent General Security of Military Information Agreement (GSOMIA) intelligence-sharing pact with Japan, the animosity in Japan toward Korea would be inflamed and U.S. anger at the impact on security in Northeast Asia would easily exceed the response in 2014-15 to Seoul dragging its feet in overcoming the impasse with Japan. Add North Korea to the mix—with its watchful readiness to seize any opportunity to widen divisions between South Korea and other countries—and the prospects for trouble only grow.

There is considerable danger that a confluence of events will strain the U.S.-ROK relationship, not only echoing what transpired in 2001-04, but to an even greater degree. Conditions in East Asia today leave little room for strategic missteps. As South Korean politics drift to the left with a renewed desire for balanced diplomacy and new overtures to North Korea and China in addition to more distance from Japan, Trump will likely put more pressure on Seoul to tighten the alliance and double down on policy shifts in 2016, which progressives oppose. Progressives would be inclined to cancel the deployment of THAAD, catering to China’s demands, while Washington would be ready to view that as not only failing to carry their burden of defense, but also as blatant disregard of U.S. defensive needs. The seeds of sharp alliance discord would be sown.

A new South Korean government in 2017 would face countervailing pressures that make paralysis a likely outcome. It could not revert to progressive policies since the conditions have radically changed, notably the North Korean threat and the Sino-U.S. relationship. The foreign policy of 2013-15 has left an untenable legacy, as all of its foreign policy initiatives collapsed in 2016. If Trump intensified pressure on North Korea and strove to tighten alliances in East Asia in the face of China, such a move could paralyze the South Korean elite and public with little prospect of responding in unison. Changes in policy in 2016—stressing sanctions and deterrence toward North Korea, letting U.S.-led trilateralism guide a more cooperative security policy with Japan, and setting idealistic goals aside as U.S. ties were reinforced—could become a foundation for the next president’s foreign policy if another conservative is victorious (but even that is in doubt). More likely, the collapse of support for Park and the return of the progressives as the leading force shaping policy discourse have eroded that foundation. The likely result is a serious rift with the one ally essential for defense against North Korea and unrealizable aspirations for a more autonomous direction in foreign policy, dividing South Koreans and resulting in disorientation on what policies should be chosen.

What should the Trump administration do in the face of these grim prospects for its vital ally in managing North Korea and in maintaining regional security in Northeast Asia? It should start by acknowledging the expertise and overall success of recent U.S. diplomacy in improving ROK-Japan relations and working with Park to transition to a new foreign policy strategy in 2016. This sensitive time for South Korea warrants doubling down on cautious diplomacy, not shifting to unilateral pressure dismissing the accumulated knowledge of specialists in various parts of the government. Also, the new U.S. administration should prioritize the North Korean threat, making clear to Seoul at the earliest opportunity that close coordination can be sustained only if neither ally surprises the other with any abrupt policy shift. In this context, it would be helpful to appreciate that U.S. policy toward China—presumed to be independent of the Korean Peninsula—would likely reverberate in China’s stance toward the North and in South Korean attitudes and policies toward the United States. Interconnected policy consequences will put a premium on expertise in U.S. policy management with South Korea, making relations with it more difficult over the coming year than with any other U.S. ally or partner in East Asia unless some surprising turn of events were to occur.