A Nation Must Think Before it Acts Executive Order 13769: America at Its Best and Its Worst
Share:

Executive Order 13769: America at Its Best and Its Worst 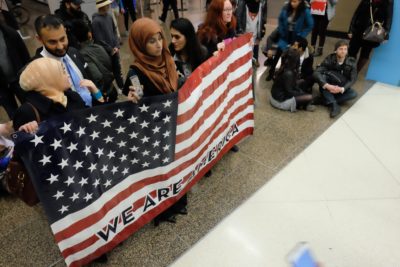 The boat held 907 passengers, refugees fleeing war and religious persecution. Denied permission to land in the United States, it circled offshore while Coast Guard cutters prevented the captain from executing his last-ditch plan of grounding the vessel. After several days of fruitless negotiation, the ship turned away from America and back towards the refugees’ home continent. They would eventually be accepted in various countries there, but that safety proved illusory: several hundred would still die as war and genocide overtook their new homes.

The boat was the German ocean liner St. Louis; the year was 1939. Despite Emma Lazarus’ words on the Statute of Liberty welcoming the hungry, tired, and poor, the United States has a checkered history when it comes to accepting refugees. Still, President Trump’s recent executive order 13769 stands out.

The stated purpose of the order is “to protect the American people from terrorist attacks by foreign nationals admitted to the United States.” But as Ben Wittes argues, it is hard to understand the order as a good-faith attempt to pursue that goal. The order imposes a 90 day suspension on entry into the United States by persons from seven countries: Iran, Iraq, Libya, Somalia, Sudan, Syria, and Yemen. It suspends for 120 days the U.S. Refugee Admissions Program, the means by which refugees are identified and admitted to the United States, with the stated intention of adding additional vetting procedures, excluding citizens of certain nations, and prioritizing claims of discrimination by religious minorities. It suspends indefinitely the entrance of Syrian refugees and caps the number of all refugees to be admitted in 2017 at 50,000.  (The 2016 ceiling was 70,000.) Case by case exceptions are permitted. At a quick look, the order bears some connection to terrorism. It’s true that foreign nationals present in the United States have killed Americans. But which nationals? The 9/11 attacks were carried out by 15 Saudis, 2 men from the United Arab Emirates, and one each from Egypt and Lebanon. The 2002 shooter at Los Angeles International Airport was Egyptian. The 2013 Boston Marathon bombers were a Russian and a naturalized American. In San Bernardino in 2015, the attackers were one naturalized American and one Pakistani. There does not appear in recent history to have been a single American killed in the United States by a terrorist from any of the listed countries. It is hard to understand why the order selects the countries it does if the selection criterion is the degree of threat posed by foreign nationals.

Other criteria fit better with the order: it identifies predominantly Muslim countries with which the United States does not have a substantial economic relationship, and it omits countries where the Trump organization has business interests, according to Bloomberg. What it seems best calculated to do is to inflict visible harm on Muslims regardless of the threat they pose while not compromising the economic interests of the United States or its president.

That is perhaps consistent with the preferences of some Trump supporters, and it is consistent with promises Trump made during the campaign. And there is certainly precedent for it in U.S. history. People who feel threatened are reassured by hearing that their government has taken the gloves off; they are comforted by seeing it strike back against others who resemble the enemy, even if they are not in fact enemies. We saw this in the detention of Japanese Americans during World War II, in the embrace of torture after the September 11 attacks, in the invasion of Iraq. From this perspective, applying the entry ban to green card holders seeking to return to their families in the U.S. is not a foolish overextension but a central feature: even these people, it says, will lose their rights for your safety; even your neighbors will be sacrificed for you. (There have been conflicting reports about the application of the ban to green card holders, but some have been detained and freed only by judicial order: two Iranian professors at the University of Massachusetts, for instance, were taken into custody at Logan airport after returning from an academic conference in Marseille.)

The order is likely not consistent, however, with federal law and the U.S. Constitution. One provision of the Immigration and Naturalization Act, 8 U.S.C. section 1152, bans discrimination based on nationality in the issuance of immigrant visas. (Another gives the President the authority to exclude aliens he deems detrimental to American interests; the interaction of the two sections is unclear.) Green card holders have additional rights: when they leave the country and return they are generally not treated as aliens seeking admission and hence probably not subject to the President’s authority to exclude such aliens. So U.S. law may block some parts of the order.

The U.S. Constitution may invalidate others. Several different constitutional arguments have been floated, but perhaps the strongest is that the order is motivated by impermissible religious bias—against Muslims and in favor of Christians. (The selection of the listed countries picks out Muslims; the preference for religious believers who are minorities in their countries of origin seems designed to pick out the Christians.) The order does not, of course, say this on its face, but statements by Trump surrogates and Trump himself, both during the campaign and in a recent interview with the Christian Broadcasting Network, suggest as much. The Due Process Clause of the Fifth Amendment, and both the Free Exercise and the Establishment Clauses of the First Amendment prohibit such discrimination.

We will find out. The order was, of course, immediately challenged in court. Judges around the country enjoined various parts of it while the cases proceeded. Acting Attorney General Sally Yates, expressing doubts about the order’s legality, announced that the Department of Justice would not defend it. She was promptly fired, and her successor has reversed course. Yates’ defiance of the President was in some ways not entirely surprising: she was an Obama appointee marking time until Jeff Sessions is confirmed. But it highlights the disconnect between the Trump administration and the federal bureaucracy. There are conflicting reports as to whether the order was reviewed at all by the Office of Legal Counsel (OLC), which advises the executive branch and normally assesses orders before they are issued. Yates’ letter seems to suggest that OLC reviewed the order, but it also uses an odd turn of phrase suggesting a circumscribed review: she noted that as Attorney General she needed to do more than OLC, which considered only whether the Order was “lawful on its face.” This suggests that Yates believed that while the order did not facially constitute unlawful religious discrimination—since it does not mention any religions by name—other statements by, as she put it, the “administration or its surrogates” confirmed the unconstitutional purpose. (Georgetown law professor Marty Lederman elaborates on this argument here.)

Executive Order 13769 and the reaction to it show us America at its best and its worst. In its content, the order is pointlessly cruel. In its form it is amateurish: poorly-drafted, produced without consultation with the agencies charged with its enforcement and sprung upon them as a surprise. Even if it had been sensible, there were bound to be mistakes in implementation. In one, a five year old American boy was handcuffed and detained for hours, separated from his family. White House Press Secretary Sean Spicer, ignoring the American citizenship, justified the detention afterwards on the grounds that five-year old boys might well be security threats.  “To assume that just because of someone’s age and gender that they don’t pose a threat,” said Spicer, “would be misguided and wrong.”  In its letter announcing the firing of Sally Yates, the White House sounded like a five-year old itself. Yates was an “Obama administration appointee,” the White House said, who had “betrayed the Department of Justice” and was “weak on borders and very weak on illegal immigration.” All that was missing was the signature Trump epithet: loser. The Trump administration, thus far, is everything we feared: petty, vindictive, immature, incompetent, and unwilling to admit even its most obvious errors.

What we can be hopeful about is the response of the courts, which thus far have treated the challenges to the executive order with the seriousness they deserve, and of the American people, who have gone to airports to demonstrate their support for refugees. They show us a better understanding of America and its relation to the world, the understanding that hurting innocent people doesn’t make us safer and shouldn’t make us feel better. The Americans who went out to affirm that the lives of foreigners matter too were showing what is best about our country. Had there been such crowds on the beach in 1939, the death camps might have claimed several hundred fewer lives.

Kermit Roosevelt is a professor of constitutional law at the University of Pennsylvania Law School.