A Nation Must Think Before it Acts Israeli Legitimacy and Partition
Share: On November 29, 1947, seventy years ago, the UN General Assembly passed Resolution 181 to partition Palestine into two states: one Jewish and one Arab. Since its foundation therefore, Israel’s international legitimacy had been intimately linked to the partition resolution.

In recent years, the question of Israel’s international legitimacy has become an issue of some controversy in Israel itself and, needless to say, in the courts of international public opinion. The main thesis presented here is that, from the early years of the Zionist movement, from the Balfour declaration onwards, the idea of a Jewish polity in Palestine was consistently tied in the eyes of the international community to some form of shared entitlement to the country, for both Jews and Arabs. These initially vague notions gradually evolved into the more concrete and clearly formulated idea of partitioning Palestine into two states. Since Israel’s international legitimacy was linked to partition, its perceived distancing from the idea of the two-state solution had an almost automatic negative impact on Israel’s international standing.

The Establishment of Israel and Partition

Shortly before the passage of the UN resolution, on November 17, 1947, Golda Meyerson (Meir), representing the Political Department of the Jewish Agency, met secretly with King Abdallah of Jordan in Naharayim. She explained that the Zionists were hoping for a UN resolution that would establish two states and that her side “wished to speak to the king only about an agreement based on such a resolution.” She did not object to his suggestion that Jordan might capture the Arab part of Palestine, provided that Jordan’s army would not interfere with the establishment of the Jewish state and that Abdallah would declare that the purpose of his forces was to maintain law and order until the UN could establish a government in that area.[1] Meir was especially cautious not to undermine partition, obviously not for the sake of the Arabs of Palestine, but in full realization that it was this resolution that would be the international underpinning of the Jewish state. 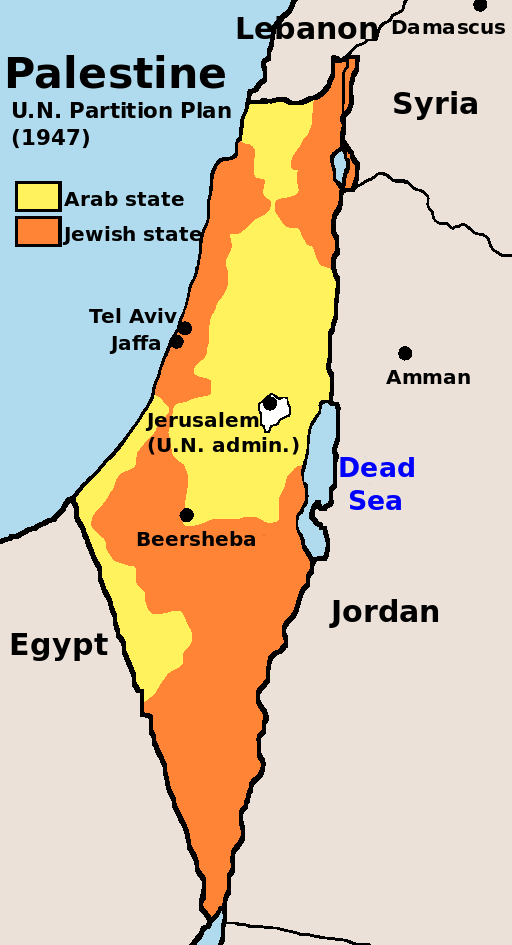 Israel’s Declaration of Independence in May 1948 was based not only on the “natural and historical right” of the Jewish people, but also on the UN partition resolution, which recognized their inalienable right to self-determination, sovereignty, and statehood. The Declaration promised complete political and social equality to all of Israel’s citizens, irrespective of religion, race, or gender, and guaranteed Israel’s loyalty to the principles of the UN Charter. It was on this basis that Israel appealed to the UN for admission to the family of nations.[2] Thus, as enshrined in its own Declaration of Independence, Israel’s international legitimacy rested on its acceptance of partition and its human rights record.

The Arabs, however, would not accept partition. They launched the War of 1948 and thus laid the groundwork for the ensuing Arab-Israeli conflict. As the War approached conclusion in the late summer of 1948, after nearly a year of fighting, the Israelis had gained the upper hand. In late September, David Ben-Gurion proposed to the cabinet that Israeli forces renew their offensive against Jordan and take large parts of the West Bank. At this stage, the Israel Defense Forces were strong enough to take of all the West Bank if it was ordered to do so. The cabinet, however, voted down Ben-Gurion’s proposal. He subsequently described this decision as a cause for “mourning for generations to come.”[3]

Ben-Gurion did not fight the issue nor did he bring the matter up again. Most who knew him believed that had he really wanted to take Jerusalem and the rest of the West Bank, he would have found the way, irrespective of this cabinet decision. Ben-Gurion actually preferred partition to the occupation of the West Bank for both demographic and political reasons. He did not believe in adding hundreds of thousands of Arabs to Israel’s population and sought to maintain favorable ties with King Abdallah. As for Jerusalem, Ben-Gurion believed that the partition of the city between Israel and Jordan was the best of all options.[4]

The partition resolution had determined that Jerusalem would not be part of either the Jewish or the Arab state, but “a corpus separatum under a special international regime” to be administered by the UN.[5] In Ben-Gurion’s mind, the partitioning of the city between Israel and an Arab party like Jordan, rather than uniting it under Israeli sovereignty, “seemed the most realistic strategy at the time for warding off persistent pressure from the great powers and the UN for the internationalization of the city.”[6] Partition, therefore, and the international legitimacy it offered, even outweighed Israel’s historical attachment to the Jewish Quarter and the holiest of holy sites of the Jewish people, Temple Mount and the Western Wall, that remained under Jordanian control in the Old City.

Israel’s border with Jordan along the West Bank and across Jerusalem was long and tortuous, perilously close to the densely populated coastal plain, and difficult to defend. The situation on the ground, however, remained unchanged until the Six Day War of June 1967, though opportunities for alteration by force arose on numerous occasions.

The Six Day War and the Rise of the Right

The post-1967 situation, the occupation and extensive settlement of the West Bank, have called into question Israel’s genuine commitment to partition, and have consequently challenged Israel’s legitimacy in the international arena. In Israel, in the aftermath of the stunning Six Day War victory, the general frame of mind was less conciliatory to the Arabs and less considerate of international opinion. Ben-Gurion’s prudence of 1948 was thrown to the wind. Within less than three weeks after the war, Arab Jerusalem and considerable territory beyond, was formally annexed by Israel. The “unification of Jerusalem” was never accepted by the international community and was not even recognized by the closest of Israel’s allies, the United States.

With the passage of time, a new militant political right emerged in Israel. The euphoric post-1967 mood that was spurred by the great victory and the conquest of the biblical heartland of Judea and Samaria gave birth to a new radical neo-Zionist religious right. Though a minority in Israel, the radical religious right has enjoyed disproportionate political influence ever since the early 1970s. Ideologically driven and distrustful of Arab ultimate intentions, they did not believe in partition, but in Jewish settlement in all of Eretz Yisrael, the Land of Israel. This settlerist neo-Zionism was not about classical Zionist secularist and defensive self-determination, but the messianic religious redemption of the Jewish people.

In the world view of these religious radicals, neither the Palestinians nor the idea of partition, and not even the elected governments of Israel, could be allowed to stand in God’s way. As of the early 1970s, some 400,000 Israelis have settled in the West Bank (this does not include Jerusalem). Many, if not most, of the settlements were not established on the basis of decisions or prior approval of the Israeli government of the day. Various Israeli governments either supinely acquiesced or were partly or fully complicit in these settlement activities, many of which were illegal even in terms of Israeli law. (Jerusalem is a category unto itself. Over 200,000 Israelis, the great majority of whom are not the ideological devotees of the neo-Zionist settler movement, live in the new post-1967 residential areas of the city built by the government or with government approval following the unification/annexation of East Jerusalem.)

Over the years, since 1967, the international community has revived the consensus on partition, or the two-state solution, to the Palestinian dimension of the conflict with Israel. Israeli settlement policy was, therefore, widely regarded as a major obstacle to this option. Indeed, the settlements were intended by their founders to serve precisely that obstructive purpose. As Israel distanced itself from partition and the two-state idea, its own policies tended to undermine the international legitimacy of the Zionist endeavor, insofar as it was represented by settlerist neo-Zionism rather than the classical Zionist endorsement of some variant of partition.

The evolving international consensus in favor of two states has given birth to ever-increasing condemnation of Israel’s settlement policies. But while the international community has consistently rejected the settlements, it has continued to accept the legitimacy of Israel within the 1967 boundaries, that is, in 78% of historical Palestine. In fact, this acceptance of Israel has become even more systemic and consistent than it had ever been in the pre-1967 era, when pressure was applied at times by the great powers on Israel to concede territory to the Arabs, or to accept refugee return.

This recognition of pre-1967 Israel, now almost an article of faith of the international community, was a remarkable historical achievement of the Zionist movement. Many Israelis, including the government, who were completely consumed by the fight over the settlements, tended to ignore this almost full glass of Zionist diplomacy. In their unbridled determination to expand well beyond the 1967 lines, eroding the principle of partition and undermining the feasibility of Palestinian statehood, they are bent on flying in the face of the political logic that has determined the views of the international community on Palestine/Eretz Yisrael for a century.

Since 1967, two contradictory processes have been at work in the international arena. On the one hand, the legitimacy of Israel as the nation state of the Jewish people, within the 1967 boundaries, has been consistently reinforced, especially in official governmental fora. On the other hand, Israel’s continued occupation and settlement of the West Bank, now in its fiftieth year, has steadily undermined its international standing and legitimacy, particularly in the non-governmental world and in the courts of world public opinion. The problem for Israel now is that it might only be a matter of time until the illegitimacy of the occupation begins to erode the legitimacy of Israel itself, in the official governmental arena as well, if and when Israel actually turns partition into a dead letter.