Anti-American Terrorism and the Middle East: A Documentary Reader

After the September 11, 2001, terrorist attacks on the World Trade Center and the Pentagon, a stunned public asked: How could this happen? Why did the attackers do what they did? What did they hope to accomplish?

This wasn’t the first battle in a conflict that has included bombings of U.S. embassies and planes, the Iran hostage crisis, and kidnappings or shootings of American citizens. This unique volume sets out to answer these questions using the unfiltered words of the terrorists themselves.

Over many decades, radical forces in the Middle East have changed and evolved, yet their basic outlook and anti-Western views have remained remarkably consistent. Barry Rubin and Judith Colp Rubin have assembled nearly one hundred key documents, charting the evolution of radical Middle East movements, their anti-Americanism, and Western policy response. The buildup to the battle between a world superpower and Middle East revolutionaries is brought dramatically to life. Among the documents included are the charters of such organizations as Hizballah, Hamas, and World Islamic Front; speeches by Syrian president Hafiz al-Asad and former Iraqi president Saddam Hussein; al-Qa’ida recruitment materials; and terrorist training manuals. The book also shows and analyzes the often conflicting and deeply conflicted responses to September 11 by journalists, clerics, and activists in the Arab world.

Supplemented by an annotated chronology, a glossary of terms, and sections that put each selection in context, this comprehensive reference serves not only as essential historical background to the ongoing aftermath of the September 11 attacks, but more generally as an invaluable framework for understanding a long-term, continuing conflict that has caused many crises for the United States. 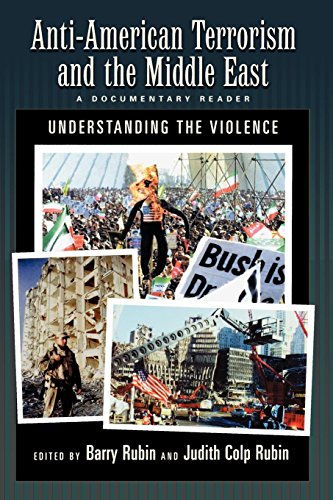 Anti-American Terrorism and the Middle East: A Documentary Reader