Convergence or Divergence?: Britain and the Continent

Jeremy Black has written an important essay on this theme. He is a distinguished historian of the 18th century, but has done a geat deal of work in covering the better part of two millennia. Since he writes very well, this book could become a little classic.’ – Norman Stone, Times;Relations with Continental Europe have been a central issue in British history. Several crucial questions can be identified: first, how similar or dissimilar was Britain, to other European countries in respect of its economy and political culture? secondly, how far can similarity and difference be understood in terms of convergence and divergence, or of roughly parallel tracks reflecting and sustaining longstanding differences? thirdly, did British people feel themselves to be Europeans? fourthly did the British people take an informed and sympathetic interest in what was happening on the Continent, or did their ignorance of Europe lead to insularity and xenophobia? and fifthly, to what extent was the British stage, and Britain as a whole involved in the affairs of Europe, diplomatically, militarily, economically, culturally? This wide-ranging, thoughtful and provocative study tackles these questions 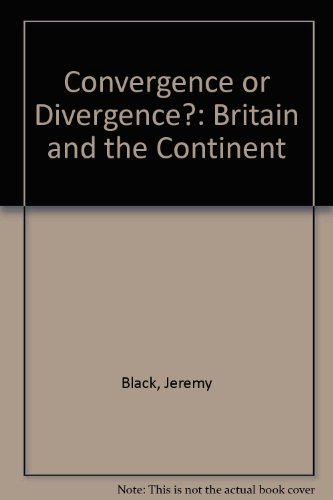 Convergence or Divergence?: Britain and the Continent