Culture in Eighteenth-Century England: A Subject for Taste

In the eighteenth century, England became the richest and most powerful country in the world. This is a rounded portrait of English culture in the eighteenth century. Not only a matter of leading writers, from Swift and Pope to Dr. Johnson and Sheridan, and of artists from Hogarth to Reynolds, there was also room for popular ballads, political doggerel, pornographic verse and vigorous satirical cartoons. Taste in architecture ranged from great houses with gardens landscaped by Capability Brown to the changed use of domestic space in towns. Jeremy Black looks at both the wealth of cultural activity in the period and at the patronage of and market for books, art, architecture, high-quality music and consumer goods. He also shows the different currents at work, belying any simple picture of England and the English as confident and self-assured. 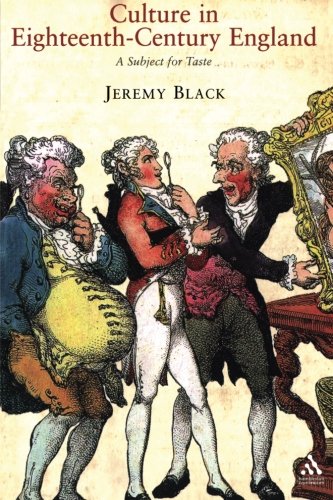 Culture in Eighteenth-Century England: A Subject for Taste