Fearful Symmetry: India-Pakistan Crises in the Shadow of Nuclear Weapons

With the nuclearization of the Indian subcontinent, Indo-Pakistani crisis behavior has acquired a deadly significance. The past two decades have witnessed no fewer than six crises against the backdrop of a vigorous nuclear arms race. Except for the Kargil war of 1998-9, all these events were resolved peacefully.

This lucid and comprehensive study of the two nations’ crisis behavior in the nuclear age is the first work on Indo-Pakistani relations to take systematic account of the role played by the United States in South Asia’s security dynamics over the past two decades in the context of unipolarization, and formulates a blueprint for American policy toward a more positive and productive India-Pakistan relationship.

“This book provides a timely review of how India and Pakistan have several times nearly allowed their grievances to lead to war – and how, each time, they managed to dodge disaster.” – Steve Coll, Pulitzer Prize-winning author of Ghost Wars

“An outstanding book which shows that nuclear weapons are a force for peace, but with major qualifications.” — John J. Mearsheimer, University of Chicago

“Explains a great deal about . . . important events, many of them not well known, and about international rivalry in general. This is an important and informative study.” – Robert Jervis, Columbia University

“This book asks an important question: Why have India and Pakistan not fought a major war in the past two decade? It gives a crisp answer: nuclear weapons. Along the way, the authors with a sure touch explore the byways of Pakistani and Indian political and military policies.” – Kenneth Waltz, author of A Theory of International Politics

“Represents a superb effort to understand the impact of nuclear weapons on South Asian stability. By using available public information about regional crises in a theoretically sensitive way, this book makes a major contribution to the deterrence literature.” – Ashley J. Tellis, Carnegie Endowment for International Peace 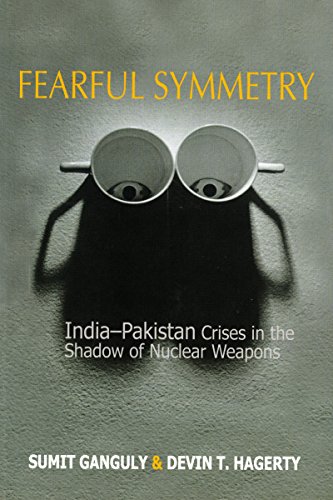 Fearful Symmetry: India-Pakistan Crises in the Shadow of Nuclear Weapons