The signing of the September 1993 Israel-PLO agreement, one of the twentieth century’s most dramatic political events, coincided almost to the day with the twentieth anniversary of the October 1973 war. While the precise timing was coincidental, the relationship between the two events is crucial. The 1973 war ironically marked the beginning of an era in which a long diplomatic effort could finally bridge the passionately intense Arab-Israeli conflict.

From War to Peace reveals new first-hand material gleaned through personal involvement at a high political level. It examines the initial warfare, the peace process, and the final breakthrough through the eyes of participants and close observers of these events and reveals the diplomatic and military stratagems they pursued. The contributors explore a number of controversial issues, including whether the 1973 war was avoidable, why peace could not have been concluded sooner, and how the chief parties have changed during this period. The book also looks to the future, explaining Israel and PLO strategies, U.S. and Russian involvement, and the potential for broadening the peace to include additional Arab states. 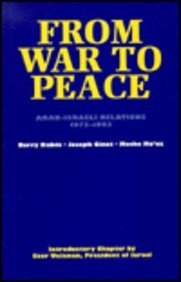