The Internet and social media are pervasive and transformative forces in contemporary China. Nearly half of China’s 1.3 billion citizens use the Internet, and tens of millions use Sina Weibo, a platform similar to Twitter or Facebook. Recently, Weixin/Wechat has become another major form of social media. While these services have allowed regular people to share information and opinions as never before, they also have changed the ways in which the Chinese authorities communicate with the people they rule. China’s party-state now invests heavily in speaking to Chinese citizens through the Internet and social media, as well as controlling the speech that occurs in that space. At the same time, those authorities are wary of the Internet’s ability to undermine the ruling party’s power, organize dissent, or foment disorder. Nevertheless, policy debates and public discourse in China now regularly occur online, to an extent unimaginable a decade or two ago, profoundly altering the fabric of China’s civil society, legal affairs, internal politics, and foreign relations.

The Internet, Social Media, and a Changing China explores the changing relationship between China’s cyberspace and its society, politics, legal system, and foreign relations. The chapters focus on three major policy areas—civil society, the roles of law, and the nationalist turn in Chinese foreign policy—and cover topics such as the Internet and authoritarianism, “uncivil society” online, empowerment through new media, civic engagement and digital activism, regulating speech in the age of the Internet, how the Internet affects public opinion, legal cases, and foreign policy, and how new media affects the relationship between Beijing and Chinese people abroad.

“The Internet, Social Media, and a Changing China is the first book-length study of the Chinese Internet after the social media revolution that completely changed the contours and possibilities of Chinese cyberspace. The individual chapters provide a diverse range of empirical and conceptual insights, and, taken as a whole, the volume stands alongside the major publications in the field.”—Jonathan Sullivan, University of Nottingham

Jacques deLisle is Stephen A. Cozen Professor of Law, Professor of Political Science, and Deputy Director of the Center for the Study of Contemporary China at the University of Pennsylvania, and Director of the Asia Program at the Foreign Policy Research Institute. He is coeditor of China Under Hu Jintao and Political Changes in Taiwan Under Ma Ying-jeou. With Avery Goldstein, he is coeditor of China’s Challenges, also available from the University of Pennsylvania Press.

Guobin Yang is Associate Professor of Communication and Sociology at the University of Pennsylvania. He is author of The Power of the Internet in China: Citizen Activism Online and editor of China’s Contested Internet. 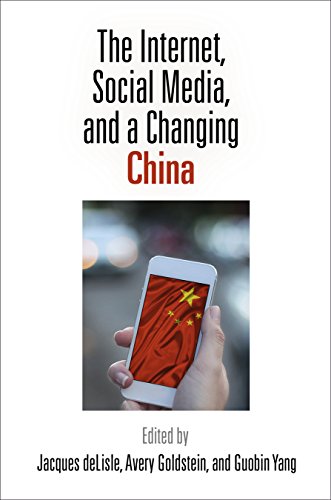