Political Leaders of Contemporary Africa South of the Sahara: A Biographical Dictionary

This is the first biographical dictionary of major political leaders in sub-Saharan Africa since 1945, leaders who have made important and often determinative contributions to politics and government in their countries and in the region as a whole. Editor Harvey Glickman has brought together an international team of experts to profile fifty-three important heads of state, theorists, party leaders, and politicians from a representative group of African countries. An invaluable reference for libraries of all kinds, this dictionary will be useful to advanced scholars and neophytes alike in evaluating African leadership, national political systems, and contemporary world history in general.

Glickman’s introduction explains the criteria used for selecting the figures profiled and then describes what is involved in being a political leader in Africa in the late colonial period, in early independence, and now in the fourth decade of independence as new forms of government and leadership appear in Africa. Glickman remarks on the lack of women in high ranks of African politics and explores reasons for their notable absence. Each profile examines the role of the leader in history, the personal events of birth, tribal affiliation, education, early career, and rise to political power. Figures chosen represent a variety of types including founding fathers, radical opposition party leaders, conservatives, socialists, oppressive dictators, and philosophical theorists. Each entry has a bibliography of works by and about the leader. A chronology lists events in sub-Saharan politics from 1892 to 1991. A list of important figures by country and a short bibliography of general works on political leadership and change in Africa complete the volume. 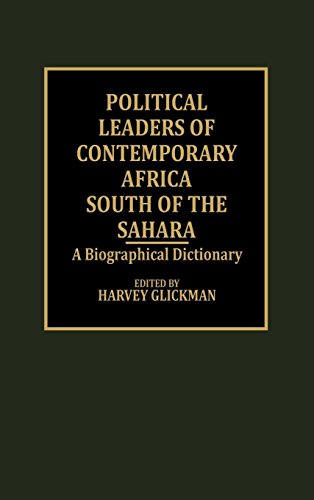 Political Leaders of Contemporary Africa South of the Sahara: A Biographical Dictionary