To what extent do international organizations, global policy networks, and transnational policy entrepreneurs influence domestic policy makers? Have we entered a new phase of globalization that, unbeknownst to most citizens, shapes policies that used to be the sole domain of domestic politics? Privatizing Pensions reveals how international institutions–such as the World Bank, USAID, and other transnational policy actors–have played a seminal role in the development, diffusion, and implementation of new pension reforms that are transforming the postwar social contract in more than thirty countries worldwide, including the United States.

Mitchell Orenstein shows how transnational actors have driven change in a policy area once thought to be beyond reform in many countries, and how they have done so by deploying their unique resources and legitimacy to promote new ideas, recruit disciples worldwide, and provide a broad range of technical assistance to government reformers over the long term. He demonstrates that while domestic decision makers may retain veto power over these reforms–which replace traditional social security with individual pension savings accounts–transnational policy makers play the role of “proposal actors,” shaping the information, preferences, and resources of their domestic clients.

Privatizing Pensions argues that even the most quintessentially domestic areas of policy have been thoroughly globalized, and that these international influences must be better understood. 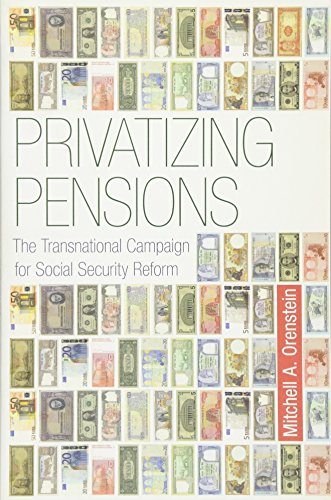