Promised Land, Crusader State: The American Encounter with the World Since 1776

When the Cold War ended and left the United States without one clear, monolithic enemy or ideology to battle, a hint of confusion and indecisiveness entered U.S. foreign policy, revealing weaknesses in the American diplomatic tradition. However, According to Pulitzer Prize-winning historian Walter A. McDougall, this confusion was not a result of the Cold War, but rather made more visible by the absence of a looming conflict. Reaching back to 1776 to analyze the foreign policy decisions made during the U.S. progression to superpower, McDougall reveals the numerous paradoxes present in American foreign policy.

Beginning with the original intentions of the Founding Fathers and the various interpretations of those ideals over the years, he deconstructs the role of the U.S. in global affairs, questioning both the logic and motives of how the nation deals with friend and foe. One of McDougall’s major contentions centers on efforts to affect other countries’ policies and governments by projecting U.S. standards or choices on them. He is particularly concerned with what he views as an overextension of resources and wisdom, and the glaring hypocrisy such efforts reveal. He points to several examples of how time and energy was wasted trying to change those who were uninterested or unwilling. As McDougall points out lucidly and convincingly in Promised Land, Crusader State: The American Encounter With the World Since 1776, one nation cannot cure the major ills of another, and the price of such an attempt is too great to risk. 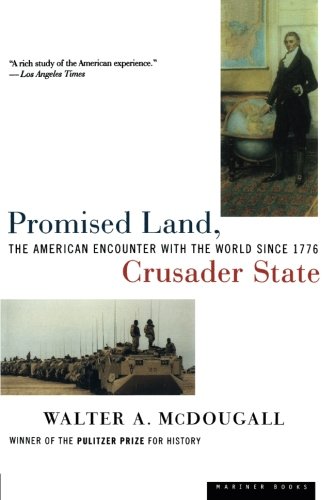 Promised Land, Crusader State: The American Encounter with the World Since 1776