Religion and Religiosity in the Philippines and Indonesia

This comparative exploration looks at religion and politics in the social dynamics of Southeast Asia’s two most populous nations. The Philippines and Indonesia are treated as one vast “Phil-Indo” archipelago. Eight leading scholars contribute interwoven and contending essays. The authors find that while neither country promotes a state religion, both lack partitions between church and state. Social dynamics of faith in each elude constitutional restrictions. In the Philippines, a Spanish tradition of an ecclesiastical state exists in tension with a Jeffersonian notion of separation of realms. In Indonesia, pre-Islamic concepts of a god-king fuse state and society, as modern initiatives surge from the premise of a prevailing Islamic community. Official religiosity pervades Indonesian national life, while Filipinos act out their private religiosity en masse, trying to overcome deficiencies in state and church. The book includes 38 photographs, in color and black and white, with commentaries that further illustrate the themes of each chapter. 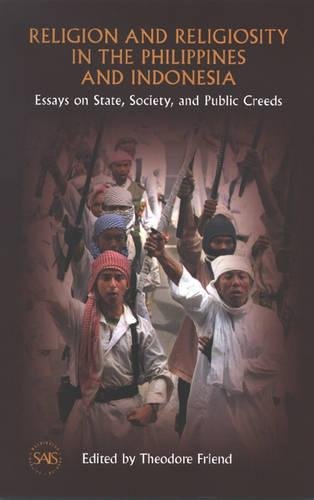 Religion and Religiosity in the Philippines and Indonesia

Theodore Friend, formerly a Senior Fellow at the Foreign Policy Research Institute, was a teacher, historian, and novelist.