State and Society in Iraq: Citizenship under Occupation, Dictatorship and Democratisation

The relentless advance of ISIS in 2014/2015 has brought back to centre stage a series of questions about the nature, and even viability, of the Iraqi state. Since the American invasion of Iraq in 2003, much scholarly attention has been given to the Iraqi state’s early formation and the impact of colonial and post-colonial policies on its development. State and Society in Iraq shifts the focus to state-society relations and assesses how critical junctures in the country’s history have affected successive and contemporary interactions. Leading experts offer a range of interdisciplinary perspectives to demonstrate the evolving nature of state-society relations, from the British colonial rule until after the fall of the Ba’athist regime. The in-depth historical analysis documents the nature of the Republican period that followed the 1958 military coup, authoritarianism, and Ba’athist ideology―particularly under the leadership of Saddam Hussein―and the later state building initiatives that included the development of social movements and democratic engagement. Emerging most strongly are the complex ways in which Iraqis of different backgrounds subverted official doctrine and, after the US-led intervention, resisted top-down democratization. The research therefore builds on current historiography to interrogate the complex matrix of consent, negotiation, resistance, and counter-discourse that constitute state-society relations. The book addresses some of the most significant problems Iraq experiences as a post-colonial state and recommends how the challenges facing Iraq’s state-society relations can be overcome. 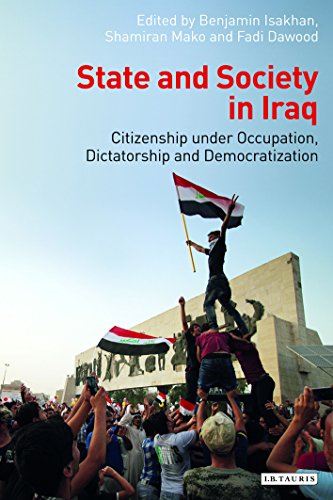 State and Society in Iraq: Citizenship under Occupation, Dictatorship and Democratisation